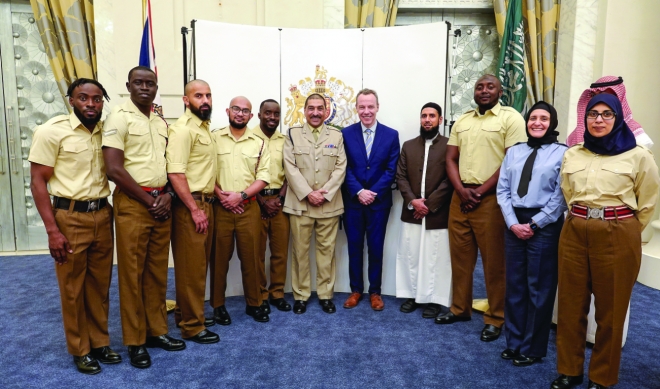 MAKKAH: The UK’s consul general said he was pleased about the return of British pilgrims to Saudi Arabia’s holy sites following a two-year absence because of the COVID-19 pandemic.

This year the Ministry of Hajj and Umrah announced that 1 million pilgrims, including those from overseas, would be allowed to perform Hajj.

For the past two years, Hajj and Umrah have been limited to those in Saudi Arabia.

The UK’s Consul General, Seif Usher, who spoke to Arab News at an iftar in Makkah, welcomed the ministry’s decision because British Muslims could once again experience religious rituals in Saudi Arabia.

“It’s very good to be back in Makkah after some time,” he said. “Mashallah, the haram is very busy. As we see, pilgrims returned to the Kingdom from the United Kingdom. The opening of the e-visa, in particular, has allowed many thousands of British pilgrims to come to Makkah and visit Madinah, come here, and perform Umrah typically during Ramadan.

“Certainly before COVID-19, we would expect tens of thousands of British nationals coming to Makkah during Ramadan. So, inshallah, we shall see increasing numbers of pilgrims from the United Kingdom coming to Makkah.”

The previous iftar hosted by the consul general was in 2019.

Saudi Arabia and the UK have a long-standing friendship, strong bilateral ties, and enjoy cooperation on economic and cultural fronts. But there is also religious cooperation.

“In the United Kingdom, we have more than two-and-a-half million Muslims or around 5 percent of the population. So, there are many tens of thousands of Muslims who travel to Saudi Arabia every year. Typically, pilgrims coming for Umrah, there’ll be more than 100,000 per year. For Hajj pilgrims, there will be more than 25,000.

“So, the numbers are significant. The role of Saudi Arabia in receiving the pilgrims, and taking care of them while they are here, is hugely important and is greatly valued both by the pilgrims themselves and us in terms of the British government. So, we’re very grateful for all the work of the authorities every year and inshallah we shall see an increase as we go forward now after the very difficult years of COVID.”

In 2019, over 130,000 British pilgrims performed Hajj and Umrah. But the last two Hajj seasons witnessed an unprecedented drop in the number of international pilgrims because of travel restrictions and other lockdown measures in Saudi Arabia and around the world.

Usher said he did not know how many British pilgrims would come for this Hajj season, but he estimated there would be between 8,000 and 10,000.

“We’re waiting to hear what the formal announcement is from the Saudi authorities, and we look forward to welcoming British pilgrims here in Makkah in the summer.”

The role of Saudi Arabia in receiving the pilgrims, and taking care of them while they are here, is hugely important and is greatly valued both by the pilgrims themselves and us in terms of the British government.

Usher, who converted to Islam 25 years ago, has worked in Sudan, Jordan, Iraq, and Syria.

His first Ramadan in Saudi Arabia was in 2019, although he arrived in the country in Sept. 2018 to supervise the Hajj journey for British pilgrims.

This year will be his fourth living in Saudi Arabia.

“Ramadan is the most special time of year I think, for all Muslims. It’s a month where we can find some spiritual peace. We can enjoy going to the mosque for Tarawih prayers, and it’s particularly special when we have the opportunity to do so in Makkah.

“So I feel very blessed that I have that opportunity. It’s been a return to normality somewhat after the difficult years of COVID, Alhamdulillah, and it’s very good to be here.”

Monday’s iftar hosted members of the UK’s armed forces who were performing Umrah.

Naveed Mohammed, the British Army’s liaison officer for improving links with British Muslim communities, traveled to Saudi Arabia with 10 other Muslims for Umrah.