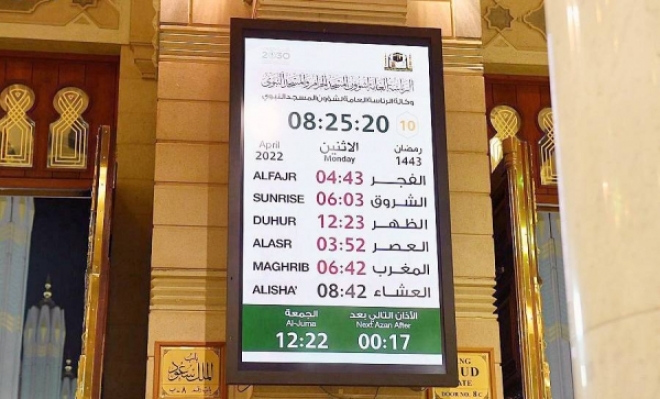 MADINAH — The technological services system at the Grand Mosque and Prophet's Mosque has formed an addition to enhance communication between service providers and visitors and Umrah performers, organizing crowds, means to support awareness efforts and field guidance, and delivering the message of the Two Holy Mosques to the whole world.

At the Prophet's Mosque, the modern technological services has embodied one side of the efforts provided to visitors during the holy month of Ramadan, which included benefiting from social media outlets and platform to allow Muslims feel the spiritual and belief vibes at the Prophet's Mosque.

This is done through broadcasting contents that explain the latest organizational sides, awareness and guidance regulations, prayer times and display belief scenes for the queues of fasting Muslims at Iftar (breaking fast) banquets at the Prophet's Mosque and its yards.

This is in addition to the field efforts that are provided to ensure the comfort and tranquility of visitors of Prophet Muhammad's mosque throughout the holy month of Ramadan.

The Saudi Press Agency (SPA) monitored some of these technological efforts that are offered across the Prophet's Mosque, including e-monitors that broadcast guiding messages for visitors in several languages to guide them with entry tracks and gates, the places of service facilities and other regulations related to the organizational and awareness aspects.

The interactive "Basmat Wusol" (Arrival Fingerprint) initiative is the latest works that were introduced to serve visitors and Umrah performers, which is composed of a digital coding in several locations across the Prophet's Mosque, entry tracks and yards.

This enables visitors quick access to the website of the Agency for the Affairs of the Prophet's Mosque and its accounts of social media and the applications of "Visitors" and "The Two Holy Mosques" through reading the barcode with their smart phones to benefit from the diversified awareness and guiding contents of these platforms and applications.

Aspect of benefiting from modern technologies include allocating a link that allows visitors of the mosque to know the occupancy status of praying areas inside the mosque, on its roof, and surrounding yards, to avoid crowded places and reduce times needed for them to arrive.

The accounts of the agency on social media outlets have contributed to expanding the scope of beneficiaries awareness and guiding programs and campaigns for visitors and worshippers before and during their presence in the mosque through launching awareness messages via official accounts of the agency on media platforms and through e-monitors spread across the mosque and its yards in both of the men and women sections.

The newly introduced technological services also include allocating e-chips in the carpets of the Prophet's Mosque, which enables the carpet administration and those responsible for cleaning and washing carpets to identify the place and number of the carpets and scheduling times for washing them through these e-chips.

This is in addition to benefiting from technology in several services as part of intensified efforts that are exerted to provide the best services for visitors of the Prophet's Mosque. — SPA