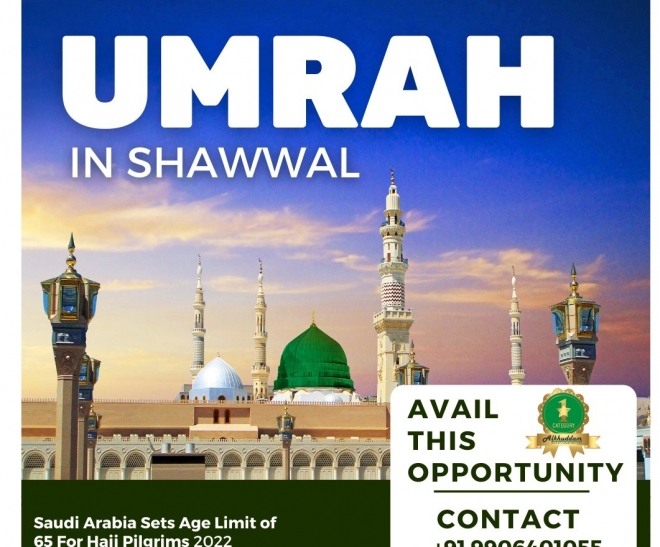 Srinagar: Barred from performing the annual Haj pilgrimage this year, the 65-plus age group of the Kashmir valley is now opting for Umrah.

The operators too have come up with special offers for the elderly people to enable them to perform Umrah during the Shawwal month of the Islamic calendar.

“There is a lot of disappointment among the pilgrims above 65 years who had registered for Hajj. In Kashmir, people generally go for Hajj after retirement and due to the new rule, around 2000 persons will not be able to embark on the pilgrimage. Now, they are registering themselves for Umrah,” the JKAHUC general secretary told The Kashmir Monitor.

Earlier, the Ministry of Hajj and Umrah—Makah in Saudi Arabia had announced that one million pilgrims, both foreign and domestic, will perform Hajj this year as the pilgrimage had remained suspended due to the Covid lockdown since 2020. The ministry, however, had further stated that this year’s Hajj was only open to those under 65 years of age and received the main Covid-19 vaccinations approved by the Saudi Ministry of Health.

Younis said the Saudi authorities had permitted performing Umrah in the month of Shawwal this year and it was a ‘golden opportunity for the 65-plus population.

“This year, Umrah has been allowed in the month of Shawwal and there are no age restrictions and it is a golden opportunity for those who are unable to perform Hajj due to the age restriction,” he said.

Meanwhile, the private operators are enticing the 65 years above pilgrims with attractive offers.

“Umrah visas would be open during Shawwal. All above 65 years who are not allowed to Go for Hajj, have an opportunity to visit Harmain and make Umrah. Please get in touch with us and avail this opportunity (sic),” reads an advertisement of the Valley-based Makkah Madina Travels.

Umrah from the Valley had been suspended in March 2020 after the outbreak of the Coronavirus pandemic. In December 2021, the Kingdom of Saudi Arabia allowed licensed and accredited tour operators from six countries including India, Indonesia, Pakistan, Egypt, and Pakistan to issue Umrah visas and design packages accordingly. Umrah had finally resumed from Kashmir in February after the completion of formalities by the tour operators


⇐ Previous:
4,500 Kenyans to make pilgrimage to Mecca
Next: ⇒
Kuwait’s pilgrim quota rolled back to 3,622