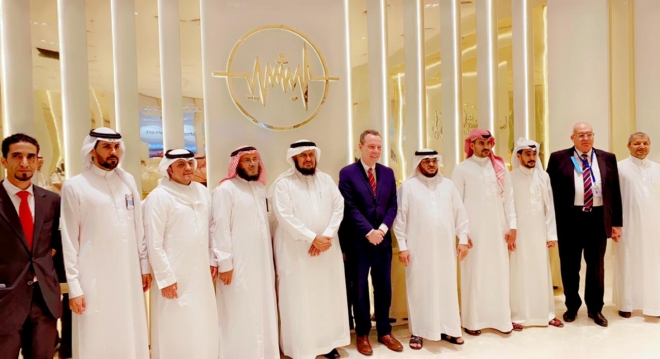 MAKKAH: The British Consul General Seif Usher has described the health services provided to Umrah pilgrims as distinguished and that the private sector in Makkah has become an essential partner in providing medical services.

He stressed that hospitals are equipped, staffed and built professionally in Makkah in line with the Kingdom’s Vision 2030 reform plans.

His statement came during his visit to the Dr. Awad Albishri Medical Center, one of the medical establishments supporting the Hajj and Umrah sector, on Sunday.

He said that 130,000 British pilgrims perform their religious rituals every year and enjoy integrated and distinguished medical services.

“Many congratulations to Dr. Al-Bishri and his team here at the hospital. It is clear from my visit today that this is a hugely important project for the development of health care services in Makkah in the private sector,” Usher said.

He added: “I don’t recall visiting such a wonderfully impressive hospital in my travels, whether it’s in the Kingdom or in many countries around the world. It’s hugely impressive, and I can see how the people of Makkah will be excited to access such first-class services for healthcare and in terms of pilgrims coming into the Kingdom who will benefit from visiting this hospital."

Regarding cooperation between Britain and Saudi Arabia, he said that the healthcare system is critical: “The UK has a wonderfully famous healthcare system called the National Health Service, but from that there is a great depth of expertise and knowledge that the private sector looks to share with overseas development partnerships,” he explained.

Usher noted that he has seen this in Jeddah most recently with the opening of the Kings College hospital, scheduled to begin operations next year.

“We’re seeing increasing cooperation between the UK and Saudi Arabia, and I think this would be a wonderful example of the potential of where we can look to deepen that type of partnership here in the Kingdom.”

He noted that the healthcare sector in Saudi Arabia has enormous potential for growth and success.

“We’re already seeing enormous interest from the UK across these sectors. Our job in the UK government is to encourage them to support those types of partnerships. I’m sure we’ll see more success in the years ahead.”

Dr. Al-Bishri, the owner of the center, said: “We extend our thanks and appreciation for the visit of the British Consul General, who toured the hospital, and expressed great admiration for the various services provided by the private sector in the hospital, which is positively reflected on the city of Makkah, Hajj and Umrah pilgrims and visitors to the Grand Mosque.”

He added that they are targeting to hire over 100 Saudi consultants to work in the facility in different specialties to provide a wide range of medical services to support pilgrims.


⇐ Previous:
10 Umrah companies fined SR50,000 each for failure in services to pilgrims
Next: ⇒
Security forces arrest a number of beggars in Makkah, Grand Mosque