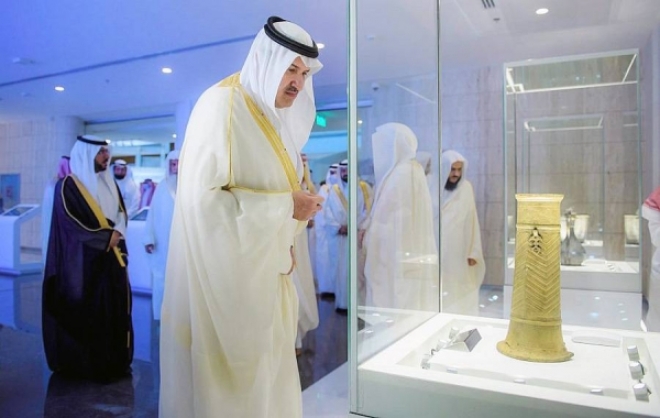 MADINAH — Madinah Region Governor Prince Faisal Bn Salman has inaugurated the Exhibition of the Prophet’s Holy Mosque Architecture, which displays the history of expansions the mosque witnessed since its establishment at the time of Prophet Muhammad, peace be upon him, through the age of Rashidun Caliphs and successive ages till the Saudi reign.

This is in addition to showcasing some rare possessions and architectural pieces related the mosque.

During the ceremony, attended by Deputy Governor Prince Saud Bin Khalid Al-Faisal, Prince Faisal commended the exhibition that is considered the core of museums and exhibitions interested in the historical and Islamic heritage of Madinah.

The exhibition is envisioned to contribute to satisfying the curiosity of Madinah visitors and enriching their journey to the Kingdom of Saudi Arabia, the host of the Two Holy Mosques.

The prince noted that the architecture of the Prophet’s Mosque, over the ages, is rich in its details and architectural, cultural and historical elements, where this exhibition showcases components and displayed possessions of the mosque and will act as a first to a series of new exhibitions, such as the museum of peace that is currently under construction in the western area of the Prophet’s Mosque.

He also stressed that the exhibition will directly seek to maintain and document the history of the architecture of the mosque since the age of Prophet Muhammad till the present time, to affirm the aspects of care by this country, under the leadership of Custodian of the Two Holy Mosques King Salman and Crown Prince Mohammed Bin Salman, deputy prime minister and minister of defense, for the civil and historical heritage of the Prophet’s Mosque.

He also stressed on the leadership’s care in implementation of the approach adopted by the Founder late King Abdulaziz Bin Abdulrahman Al Saud in Madinah not to change or remove any of the cultural, civil or heritage aspects concerning the architecture of the Prophet’s Mosque and to keep all these elements as they are, care for them, maintain them and build on them.

The prince also expressed pride in the cultural role of the exhibition and in shedding light on the rich museum displays, referring to the maintenance and renovation programs implemented under the supervision of professional specialists in this field.

The exhibition also displays the elements of the architecture of the mosque in a way that suits its status, not to mention the role of such endeavors in increasing the level of cultural awareness in the Islamic civilization among visitors of this blesses country.

The exhibition seeks to highlight the architectural aspects of the Prophet’s Mosque and sheds light on its privacy, status, and architecture, in addition to displaying unique architectural and historical models, the most important of which is the Minbar (Pulpit) of Qaytbay, which dates back more than 600 years ago.

It also highlights several precious showcased items in the exhibition that uses modern technologies to display contents and relies on the chronology of the architecture of the Prophet’s Mosque in multiple languages.

The exhibition represents a comprehensive platform that allows historical vision with actual seeing and inspection of the Prophet’s Mosque through the utilization of scientific and cognitive details in cooperation with several institutions.

These include, to mention but a few, Al-Madinah Al-Munawwarah Research and Studies Center, the General Presidency for the Affairs of the Two Holy Mosques, Development of Madinah Authority, and King Abdulaziz Center for World Culture (Ithra). — SPA


⇐ Previous:
Hajj 2022 from Algeria: new conditions on the menu
Next: ⇒
Umrah season for foreign pilgrims to end May 31