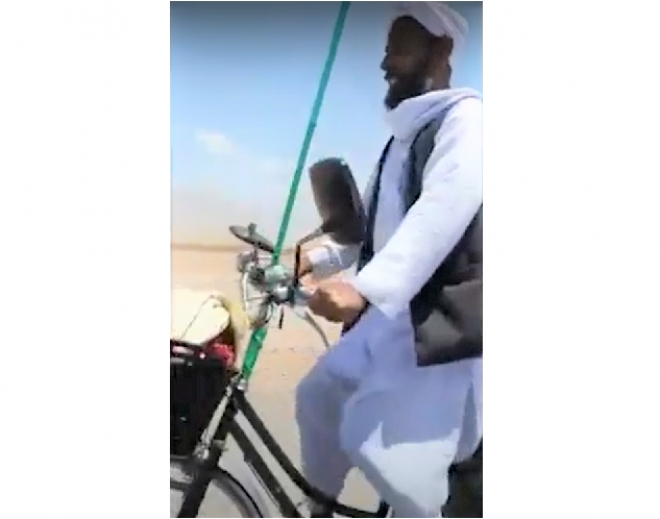 Every year, Muslims across the globe embark on the long and cumbersome journey to perform Hajj to fulfill one of the fundamental tenets of Islam, but some aspirants go the extra mile and astonish the rest with their passion and enthusiasm for the sacred obligation.

Among such aspirants is Noor Ahmed who decided to use his bicycle for the trip and become an inspiration for those who haven't been able to perform the pilgrimage despite having the necessary financial means.

Observing Ahmed's passion, the Afghan government offered him an air ticket so that he could travel more comfortably, but his response to that is a source of amazement.

"I have intended to travel on my own and I'm doing so to fulfill the Almighty's commandment," he said when asked about his decision to not avail the offer.

The intending pilgrim went on to add that he had planned to get visas for Iran and Iraq when he gets there.

"Please pray for us," said a fellow traveller who was left speechless by Ahmed's noble intention and will.

This isn't the first time someone planned to use a bicycle to travel to the sacred land.

In 2019, eight British pilgrims reached Saudi Arabia after bicycling their way to Makkah after a two-month-long trip to perform the Hajj.

According to StepFeed, the pilgrims traversed through 17 countries to arrive in the kingdom.

The team's leader, Taher Akhtar pointed to the difficulties his team had experienced during the trip, including fluctuations in weather, rain, storms, humidity and shortage of oxygen, in addition to hard roads, animals, and snakes.

He was quoted as saying: “The journey is spiritual, and despite its difficulties, it remains one of the most wonderful trips.”