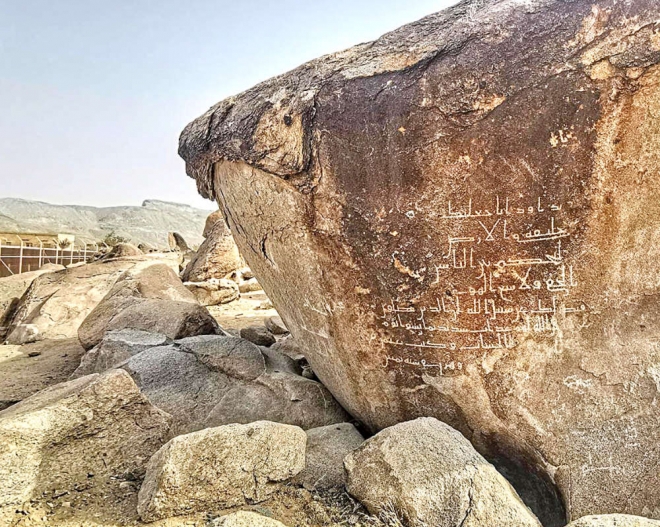 Wadi Al-Asilah contains 60 early Islamic inscriptions — material that is highly important in the study of Arabic calligraphy. The Al-Asilah Valley is one of the valleys to the northeast of Makkah. It borders the Grand Mosque from the Al-Ju’ranah side and is located between El-Baroud and Al-Abtah, to the northwest of the ritual sites. It is 2 kilometers wide and 6 kilometers long, and stretches between Rai’ Al-Nuqra and Rai’ Umm Al-Silm.

Dr. Fawaz Al-Dahas, director of the History Center of Makkah, said that the Al-Asilah region is known as the neighborhood of the descendants of Abdullah bin Khalid bin Usayd, who ruled Makkah during the caliphate of Caliph Uthman bin Affan.

The total number of inscriptions is about 60, including one in the name of Safiyyah bint Shiba bint Uthman, and another in the name of Mohammed bin Abdul Rahman bin Hashim from the first century.

The neighborhood saw keen interest throughout the ages from Muslim caliphs and sultans, as well as rulers of Makkah. They were keen to provide drinking water for pilgrims. The area was located on the path of Iraqi pilgrimage caravans. Wells became clustered near the location of the inscriptions, with small distances of about 200 meters separating them.