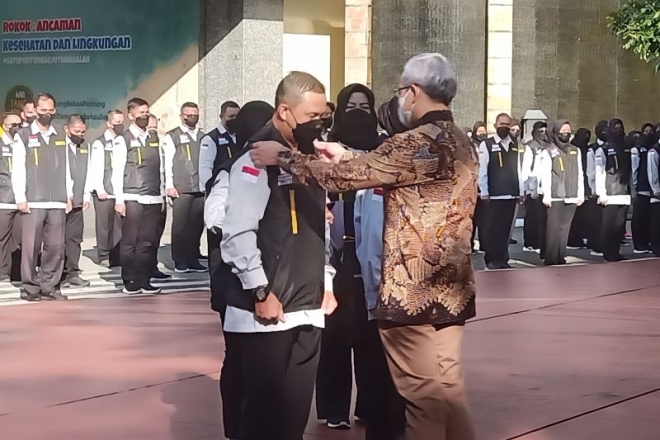 Jakarta (ANTARA) - Secretary-General of the Health Ministry Kunta Wibawa Dasa Nugraha along with several officials from the ministry have deployed 776 health workers to serve Indonesian Hajj pilgrims in Saudi Arabia on Tuesday.

"Those health workers will be responsible to protect and provide health services for Indonesian Hajj pilgrims in Saudi Arabia. The Health Ministry has recruited and will deploy health workers, who will serve as Hajj Organizer Committees (PPIH) in Saudi Arabia in the health sector for a group of 776 people," Head of the Hajj Health Center at the Ministry of Health, Budi Sylvana, stated.

Sylvana later remarked that Hajj health workers will be deployed to Saudi Arabia in stages from May 28, 2022. Some of them will also be deployed with a group of Indonesian Hajj pilgrims.

"The advance team had been deployed on May 28, 2022, and comprises 12 people. Meanwhile, PPIH Saudi Arabia in the health sector and Medina and the airport health team will depart on June 1, with members totaling 118 people," he remarked.

He remarked that all PPIHs in Saudi Arabia will gather at the Pondok Gede Hajj Dormitory in Jakarta before departing for Saudi Arabia.

Meanwhile, the PPIH, comprising doctors and nurses, will depart in stages along with the departure of Hajj pilgrims from June 4 to July 3, 2022, he stated.

The departure of Hajj health workers to the Holy Land will be conducted through the Embarkation of Aceh, Medan, Padang, Batam, Palembang, Jakarta, Bekasi, Solo, Surabaya, Makassar, Balikpapan, Banjarmasin, and Lombok.

"There will also be surgeons, orthopedic surgeons, and medical emergency specialists," he concluded.