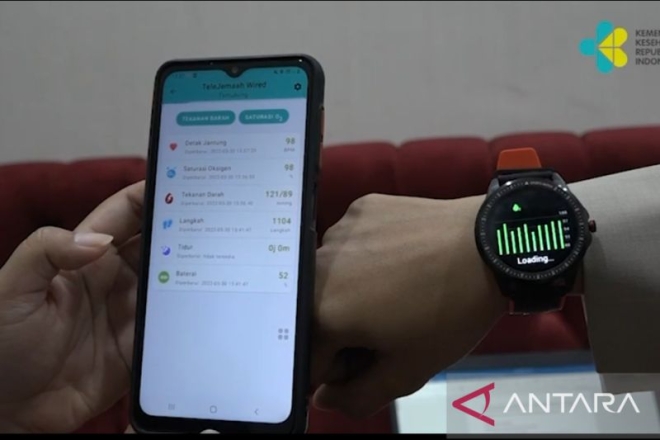 Jakarta (ANTARA) - The Health Ministry has readied "Telejemaah" devices to monitor the health conditions of Indonesian Hajj pilgrims, especially people, with high health risk, during their pilgrimage in Saudi Arabia.

"The pilgrims will wear smart watches that can monitor their heart rate and count their footsteps. It will be connected directly to (the tracking devices of) the Hajj Organizing Officer (PPIH)," Kunta Wibawa Dasa Nugraha, the ministry's secretary general, stated here on Tuesday.

In addition, he noted that the "Telejemaah" equipment can monitor the blood pressure, oxygen saturation, and stress levels of Hajj pilgrims.

"The devices can quickly figure out if the pilgrims are tired or ill. Thus, we can take them to health care facilities or refer them to our (Indonesian) hospital," he stated.

The secretary general remarked that the device will give a signal to the user through vibrations if it detects any harmful symptom indicating fatigue or health problems.

The devices are also equipped with a GPS tracker to monitor the locations of pilgrims and a battery that can last for up to two weeks and be recharged, he noted.

Head of the Hajj Health Center at the ministry, Budi Sylvana, stated that the preparation of health tools had reached the final stage.

The system of the devices is being improved to help the families of pilgrims and related authorities to also be able to monitor the health conditions of Indonesian pilgrims, he stated.

His side has targeted to distribute health equipment to the pilgrims in early June 2022.

"Thus, if the (Saudi Arabian) officers found any Indonesian pilgrims, they just have to scan the barcode using their phone to find the (pilgrim’s) information," he noted.

He explained that if utilization of the devices went well during the 2022 Hajj period, it will also be implemented during the next pilgrimage period.