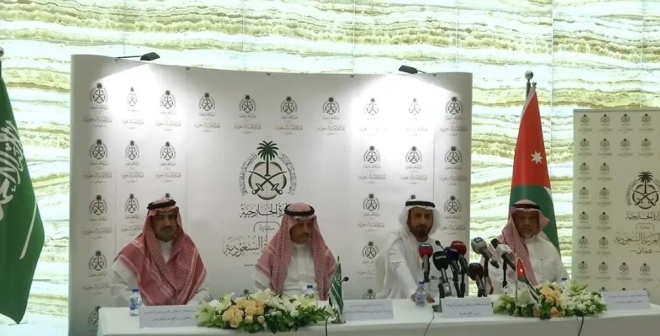 MAKKAH: This year’s Hajj season will accommodate 1 million pilgrims to ensure people’s safety amid the pandemic, ensure the quality of the services provided, and everybody’s safe return to their home countries, the Kingdom’s Hajj and Umrah minister told a press conference in Amman on Thursday.

Dr. Tawfiq Al-Rabiah said the ministry was still working to ensure pilgrim health and safety and that the Kingdom’s Vision 2030 aimed to develop the services provided to pilgrims, improving and further facilitating their access to the Two Holy Mosques for a more distinctive, richer, and higher-quality experience.

He said: “We know that there are many requirements to perform Hajj for this year. But the safety of pilgrims and their safe return to their countries remain our priorities. In addition, we were keen on using the Hajj technologies, including the pilgrims' smart ID, which we will keep implementing this year to render the transport of the visitors of Allah easier and to ensure their fast arrival to their locations and tents whether in Mina or Arafat.”

Al-Rabiah said that previously set channels entailed receiving pilgrims and visitors from outside Saudi Arabia, accessing the Two Holy Mosques, and performing the pilgrimage and Umrah rituals through agents.

However, the ministry had now launched electronic services meaning a person could apply digitally and directly to get the necessary Umrah visa, accommodation, transport, and other services upon heading to Makkah.

He said the Umrah visa would be issued within less than 24 hours and that its validity would be extended from one to three months without any restriction on visitors.

It would now be possible for a person traveling to the Kingdom to perform Umrah to move between Saudi cities without restrictions, he explained, saying that the ministry would continue to offer everything that contributed to developing and enriching the Umrah experience.

The electronic service for facilitating the Umrah visa was easy, and the trusted companies offering their services electronically were available on the ministry website.

The minister said that those people who applied electronically for Umrah could review their application on the website, emphasizing that people should ensure they registered with the relevant companies through the ministry website.

Al-Rabiah said that Eatmarna was among the services launched during the pandemic. It aimed to organize Umrah pilgrims and when they performed their rituals.

It had greatly contributed to the ideal distribution of visitors throughout the day by using digital analysis technology to avoid overcrowding.

He added that Saudi Arabia was keen on holding the Hajj and ensuring it went smoothly and easily.