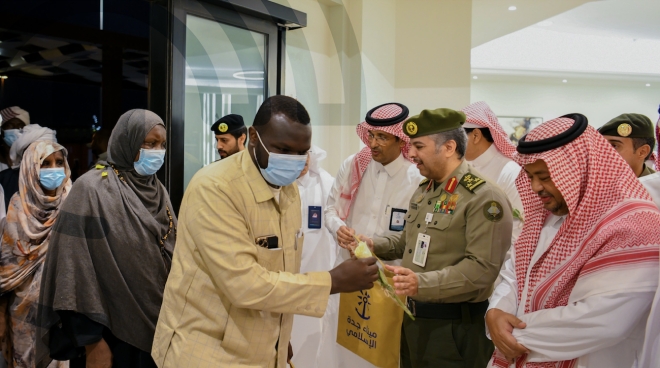 The first group of Hajj pilgrims traveling by ship arrived in Jeddah from Sudan on Friday.

Jeddah Islamic Port said there were 1,519 people aboard the “Amana” and they were received by the port director-general, Majed bin Rafed Al-Arqoubi, and senior government officials who greeted them with rose bouquets, gifts, and souvenirs.

The president of the Saudi Ports Authority, Omar Hariri, said all necessary measures had been taken to ensure that the pilgrims’ journey by sea was comfortable.

The first group of Hajj 2022 pilgrims to arrive through Jeddah Islamic Port are welcomed to the Kingdom on Thursday. (@jeddahport)

Hariri said the authority had taken all measures to enhance its readiness to receive the pilgrims and raise its efficiency and performance levels for everything that would complete the procedures for receiving pilgrims and dealing with baggage.

The authority has launched development initiatives in line with the National Strategy for Transport and Logistics and Vision 2030 by equipping five passenger terminals for arrival and departure, harnessing all services to facilitate the entry and docking of ships, and supporting national efforts during this year's Hajj.

The first group of Hajj 2022 pilgrims to arrive through Jeddah Islamic Port are welcomed to the Kingdom on Thursday. (@jeddahport)

It has also worked to provide primary healthcare services within the port by rehabilitating a medical clinic and equipping advanced ambulances to transport people requiring hospital treatment, taking into account the process of transporting pilgrims from the docks to arrival halls by bus and allocating a sufficient number of vehicles for the transfer of luggage.

The pilgrims who arrived by sea at Jeddah port expressed their happiness with the warm reception they experienced and the smooth and easy completion of their arrival procedures.

They expressed their gratitude to the Saudi government for its interest and care for pilgrims coming from all parts of the world to perform the Hajj, praising the good organization and grouping.