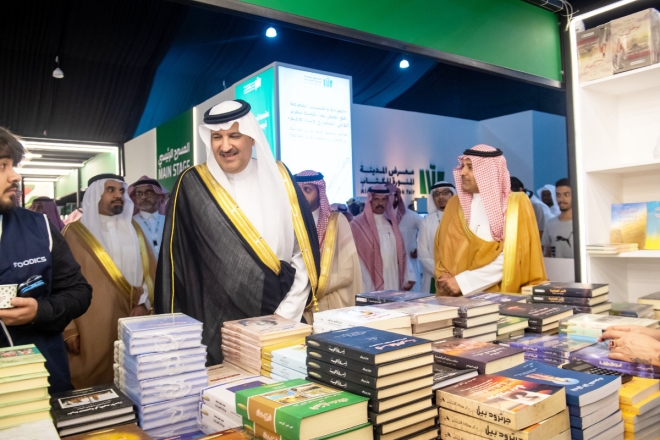 MADINAH: More than 200 publishers and other related organizations are taking part in the inaugural Madinah Book Fair, which began on Thursday at the King Salman bin Abdelaziz Center for Exhibitions and Conferences.

During the opening ceremony, Mohammed Hassan Alwan, the CEO of event organizer the Literature, Publishing and Translation Commission, said: “The commission is seeking to build its role in the book fair industry based on partnership and integration foundations, and we also aim to provide the people of the city with a renewed cultural scene, and we hope to offer the publishing industry beneficial, culturally and economically viable book fairs.

“We are keen that the city book fair will be an annual exhibition with a distinctive position on the map of Arab book fairs.”

The 10-day event, held under the patronage of Madinah’s governor, Prince Faisal bin Salman bin Abdulaziz, continues until June 25. It includes workshops, cultural and theatrical programs and events for children that offer a window into the creation of literature and the publishing industry.

In a message posted on June 6 on Twitter, the official account of Saudi Book Fairs wrote: “In the heart of Medina the cultural program activities of the #Madinah_Book_Fair_2022 are launched to provide an integrated knowledge journey that promises visitors a unique cultural experience.”

Organizers said the event aims to enhance the cultural status of Madinah, boost the Saudi publishing sector, encourage cultural exchanges between countries, provide an integrated journey for readers, and highlight the role of reading in raising awareness and improving quality of life.

Among the more than 200 publishers and related organizations taking part, more than 80 are from the Kingdom, including universities, research centers, foundations, commissions, bookstores and libraries. The event attracted huge crowds on day one.

Amir Alsaiegh, a 46-year-old literature lecturer and self-professed bibliophile, told Arab News: “I came today with two suitcases to fill them with book selections which I came to pick from the fair.

“I have a long list for today and I am glad about the huge number of publishing houses available here. The fair exceeded my expectations.”

Ibtihal Al-Jabri, 17, visited the fair with her three sisters who, like her, are all book lovers.

“I was so excited for the book fair when they first announced it two weeks ago,” she said.

Her sister Nouf, 22, added: “This event is the first of its kind in Madinah; I have been waiting for it for so many years. I love it and am willing to come here every day.”

The attractions included immersive offerings in Arabic and English for children, including educational theatrical shows and workshops on topics such as storytelling, handicrafts, drawing, writing, interactive reading, heritage arts, Arabic calligraphy and philosophy.

Six-year-old Samia Al-Nahdi said: “I love reading. I came today with my parents because they like reading, like me.”

Madinah Book Fair is part of the Book Fair Initiatives, one of the Literature, Publishing and Translation Commission’s strategic initiatives that aims to stage fairs across the Kingdom to give Saudi readers a chance to explore works published by local, Arab and international publishers and learn about the latest developments in the publishing industry.

To accompany the start of the book fair, two other events took place on Thursday. The first was the opening of a new museum at King Abdul Aziz Complex for Waqf Libraries, which was inaugurated by Prince Faisal.

Fahad Al-Wahbi, the organization’s secretary-general, told Arab News: “Today, the complex is participating in this museum, which aims to shed light on a group of important archaeological and historical collectibles, which vary from ancient manuscripts, some of which date back thousands of years, to rare precious Qur’ans that represent different historical periods, and collectibles from the Prophet’s Mosque.”

The other event involved the King Salman Charter for Architecture and Urbanism, an organization that celebrates the essence of Salmani Architecture, which has organized an exhibition that was first staged in Riyadh before touring Jeddah, Abha and Dhahran, and has now arrived in Madinah.

Sumaya Al-Sulaiman, CEO of the Architecture and Design Commission at the Ministry of Culture, told Arab News: “We have also taken it to Expo Dubai 2021, and we are taking it internationally because this is an international methodology that we think is applicable anywhere.

“It is one of 33 initiatives that we have in the Architecture and Design Commission. It is one of the earliest and most important, given the extent and impact that we anticipate.”

She said the exhibition aims to reflect the fact that “the experience we have had in Riyadh city through the patronage of King Salman has been so influential that there has been a development of identity within the city of Riyadh through multiple projects that we have seen.

“From an architectural point of view, the charter displayed a masterpiece that has gained international recognition. There are six values within the charter that are guiding principles, including continuity and authenticity, … the individual and community (and) the last values are related to innovation and sustainability.”


⇐ Previous:
Deleting companions in Hajj reservation is possible, but with one condition
Next: ⇒
First group of Pakistani pilgrims under Makkah Route initiative's lands in Jeddah