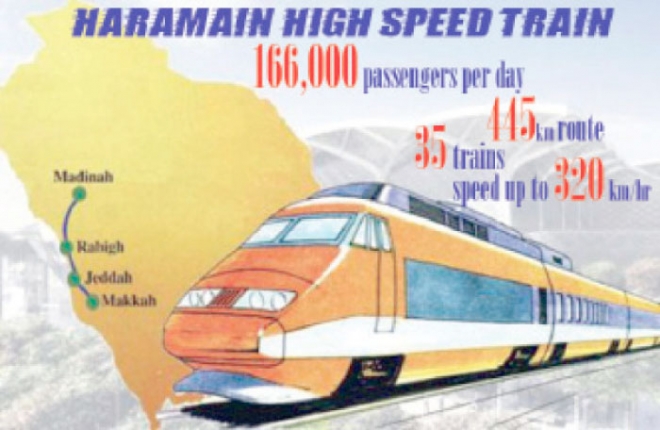 JEDDAH — The Haramain express train will start operation in 2018, local daily Al-Madina reported on Tuesday quoting Rumaih Al-Rumaih, chairman of the Public Transport Authority and the Saudi Railways Organization (SRO).
The train will be linking Makkah and Madinah with Jeddah and King Abdullah Economic City in Rabigh.

“Work on the project will be completed before the end of this year,” he said, adding that test runs are currently being conducted on the Madinah-Rabigh line.

According to recent reports, only 20 km of rails in Makkah are to be completed. Out of the distance of 450 km between Makkah and Madinah, about 430 km of rails have been completed.

Rumaih also said that a study will soon be conducted for the construction of dry ports near King Abdul Aziz Seaport in Dammam and the Jeddah Islamic Seaport.

“These dry ports will reduce the pressure on sea ports in the western region and the Eastern Province and will put an end to the stockpiling of containers,” he told local daily Al-Yaum on Tuesday.

Rumaih said that studies have been completed and blueprints are ready for the construction of a 1,150-km-long railway land bridge linking the west and the east of the Kingdom.

Rumaih invited the private sector to participate in the implementation of the project and said partnership between the public and private sectors will improve services and boost the sustainability of the basic infrastructure.