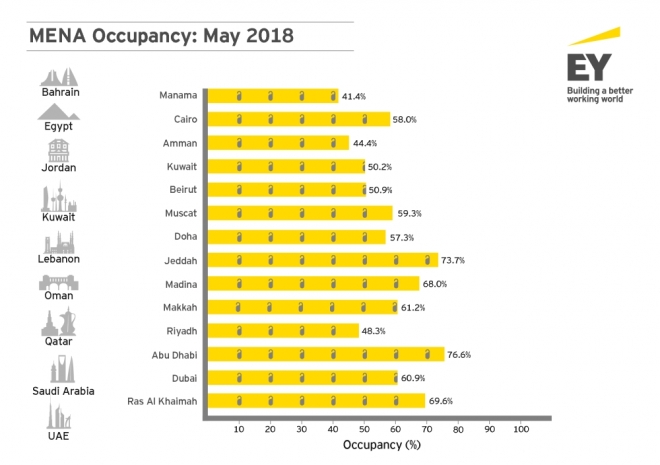 RIYADH — Overall, the majority of the internationally branded four and five star hotels in the Middle East hospitality market witnessed a decline across occupancy, average room rate (ADR) and RevPAR in May 2018 when compared to May 2017. In terms of KPIs, Abu Dhabi maintained the highest occupancy for the month of May with a 76.6% occupancy rate. Saudi Arabia was the top performer across the other metrics with Jeddah recording the highest ADR of $351, resulting in the highest RevPAR of $259 in May 2018.

Due to Ramadan beginning in mid-May this year and the onset of the summer season, the overall decline in performance in the region is unsurprising.

Saudi Arabia, however, benefitted from the large influx of pilgrims during the holy month. Over two million pilgrims were expected to have visited the holy city, resulting in increased KPIs across Makkah, Madinah and Jeddah, with declines only in Riyadh.

The MENA hospitality market will continue to see a drop in KPIs during the summer season as business travel declines and conferences and events are at a minimum.” — SG