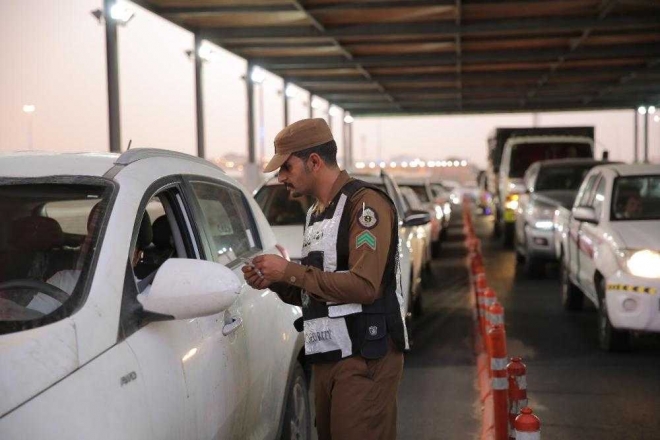 JEDDAH — Security authorities have intensified the scrutiny of people entering Makkah and the holy precincts.

The special forces of road security are braced to curb any attempt by citizens and residents who are not in possession of Haj permits or other entry authorization to enter the holy precincts until after Haj.

The forces have fanned out throughout all roads, including mountain roads, leading to Makkah since the entry ban came into effect in the wee hours of Tuesday.

"Our forces will deal firmly with any unauthorized person who try to enter Makkah from Tuesday,” Maj. Gen. Zayed Al-Tuwaiyan, commander of special forces for road security, said in a Twitter message on Tuesday.

Officials, however, said Saudis and GCC citizens in civil clothes would not be stopped at the checkpoints. They said people wearing ihram but not carrying Haj permits will be turned back from the checkpoints, which have been set up on all roads leading to Makkah and the holy sites.

According to Al-Tuwaiyan, 188,464 people who tried to enter the holy city without permits were turned back from the checkpoints until Sunday. He said 83,764 vehicles were turned back or impounded for violating the Haj rules.

Security officers can check the authenticity of Haj permits in a matter of seconds using barcode devices.

Al-Tuwaiyan warned that expatriates caught while trying to sneak into the holy precincts without permission would be fingerprinted and deported. They would also be slapped with a 10-year ban on entering the Kingdom, he added.

Al-Tuwaiyan stressed the need for anyone who intends to perform Haj to obtain the required permits. The security command will not be lenient with anyone, he said while emphasizing that everyone must comply with the directives for transporting pilgrims by obtaining necessary permits.

Explaining the operations of road security forces, the commander said the officers would seize vehicles that violate rules for the transportation of pilgrims and ensure parking of vehicles carrying foreign pilgrims in designated locations after the pilgrims unboard.