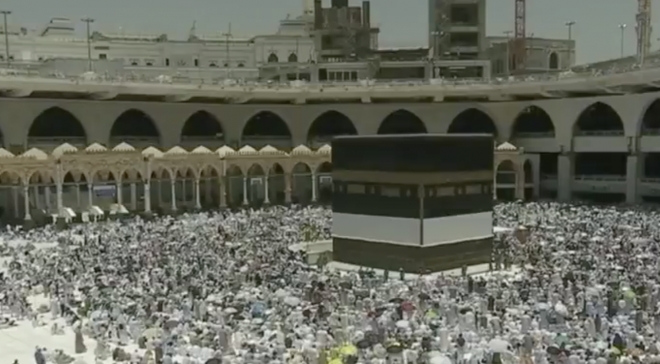 MAKKAH: Pilgrims packed Makkah’s Grand Mosque to hear the Friday sermon ahead of the start of Hajj.

They listened to an emotional speech by imam Saud Al-Shuraim on the magnitude and significance of Hajj.

Nearly 2 million pilgrims from around the globe have made the trip to take part in this year’s pilgrimage.

Worshippers will head to Mina for the start of Hajj on Sunday before heading to the plains of Arafat on Monday for the climax of the annual ritual.

A number of Saudi ministries are coordinating to facilitate for pilgrims their prescribed rites.

The Hajj and Umrah ministry has set up a special number to assist pilgrims and the minister, Mohammed Saleh Banten, reiterated that politics and Hajj don’t mix.

“Saudi Arabia has no condition to impose on any Muslim coming only to perform their Hajj rituals in peace,” he said.

Maj. Gen. Sulaiman bin Abdul Aziz Al-Yahya, director general of passports, told a press conference: “Up to this moment, our air, land and sea checkpoints have warmly received 1,684,629 pilgrims from different countries of the world.”


⇐ Previous:
FaceOf: Hisham Siraj Hammami, chief information officer of the Ministry of Hajj and Umrah
Next: ⇒
Hajj is a joyful and moving experience for Taiwanese pilgrims