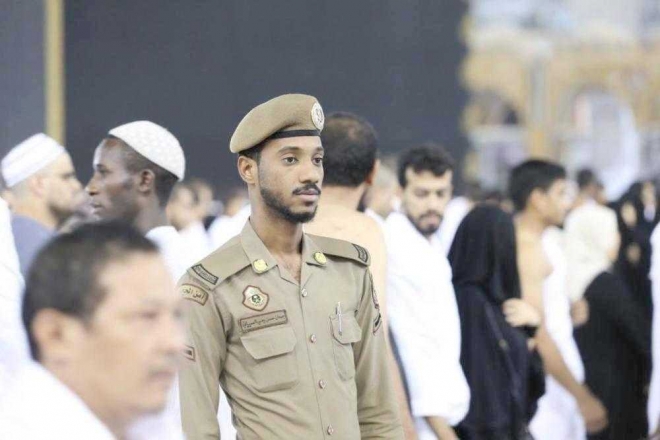 MAKKAH — Jamaan Al-Subyani, the policeman in the security forces of the Grand Mosque who took off his shoes and offered it to an old Pakistani woman pilgrim, said he had no idea he was being filmed and added that what he did was a natural conduct for every Saudi even if it was not documented by video film.

Jamaan said he was on his way home after performing the Friday prayer last week when he saw a young man trying to lace his mother's shoes and considered this to be a normal behavior.

"On closer scrutiny, I realized that the shoe the young man was trying to lace was not more than a piece of cardboard from a carton which would not protect the woman against the scorching heat," he said.

"Without any hesitation, I took off my shoes and offered it to the aging woman. She refused at first but I insisted until she finally accepted to wear my shoes," he said.

The video filming the incident went viral on the social media and a number of tweeters commended what he had done.

"Many Saudi young men would do this to aid the pilgrims and we are just following the footsteps of our leadership who would do whatever they could for the service of the guests of God," he said.

Jamaan said he was surprised that the video went viral on the Internet especially that he had no idea whatsoever that the incident was filmed.

"I am proud that emir of Makkah Prince Khaled Al-Faisal has praised my work. I consider this to be a medal on my chest," he said.