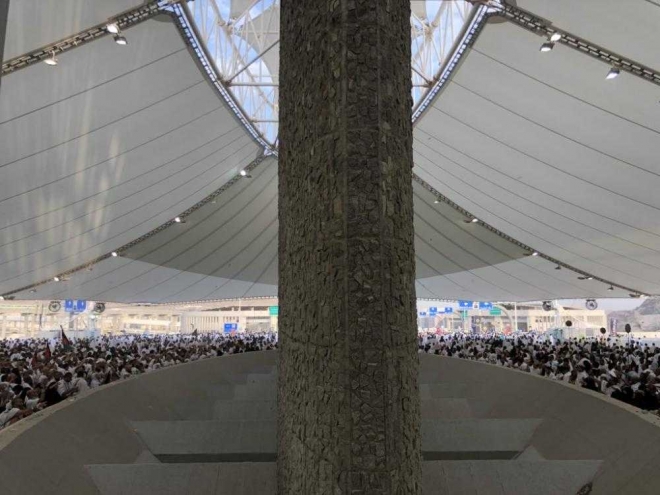 MINA — More than 2.3 million pilgrims, who have reassembled in Mina, on Tuesday celebrated the Eid Al-Adha with the rest of the Islamic world, threw the pebbles at the Satan, slaughtered their sacrificial animals, changed into plain clothes, shaved off their hair and proceeded to the Grand Mosque to do tawaf Al-Ifada at the end of the Haj rites.

The pilgrims gathered in Mina, which they left for Arafat and Muzdalifah on Monday for the Grand Stand on Arafat hillock and spent the night or part of it in Muzdalifah, before they proceeded back to Mina to complete the rituals.

According to the General Authority of Statistics (GaStat), the total number of pilgrims who performed the Haj this year was 2,371,675 of whom 1,758,722 came from outside and 612,953 were domestic pilgrims.

According to the GaStat, the pilgrims from the Asian countries, excluding the Arab countries, were1,049,496 representing about 59.7 percent.

Pilgrims from the non-Arab African countries were 166,083 representing 9.5 percent, the pilgrims who came from Europe were 88,601 representing about 5 percent and from North and South America and Australia were 24,992 representing 1.4 percent.

GaStat chairman Fahd Al-Tikhaifi, said the statistics were prepared by more than 470 statistical researchers who worked day and night collecting data since the first day of Haj until the end of Arafat day.

There were 888 domestic pilgrims from the Philippines, 680 from Palestine, 641 from Tunisia, 623 from Morocco and 527 from Nigeria.

He said a number of pick pocket cases were also uncovered in Arafat.

The Saudi Red Crescent Authority (SRCA), on its part, said it had provided medical treatment to a total of 2,794 pilgrims in the Grand Mosque and on the roads leading to the holy sites.

The authority said the ambulance services were extended to more than 4,356 pilgrims in Makkah, the holy sites and Madinah.

It said the ambulance paramedics provided services to about 1,562 pilgrims in the Prophet' Mosque, the roads leading to Madinah and at Prince Muhammad Bin Abdul Aziz International Airport.