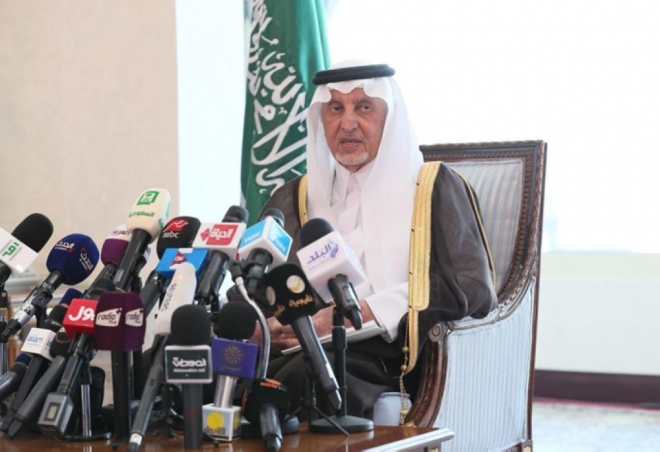 MINA — Prince Khaled Al-Faisal, emir of Makkah, advisor to Custodian of the Two Holy Mosques and chairman of the Central Haj Committee, said that the Saudi officials had used new technologies effectively to run the massive annual pilgrimage of Haj.

“We aspire to (have) a smart Haj by using technology in all future activities. The preliminary study of an integrated project for the development of Makkah and the holy sites, in accordance with Saudi Arabia's Vision 2030, has been completed and will be implemented as soon it got approval from the Royal Commission for Makkah and the Holy Sites,” he said while addressing the last press conference for this year's Haj at his office in Mina on Thursday.

“The development of Makkah and the holy sites, which will be implemented in phases, would depend entirely on technology and rapid communication,” he said, adding that the Vision 2030 targets the arrival of five million Haj pilgrims and 30 million Umrah pilgrims in future.

Prince Khaled denied some media reports saying that Saudi Arabia banned Qatari nationals from performing Haj. “Such reports do not affect us as the Kingdom of Saudi Arabia announced more than one time its willingness to receive pilgrims from any country in the world. Qatar was called to allow its citizens to perform Haj rituals,” he said.

Prince Khaled drew attention to the call made by Custodian of the Two Holy Mosques King Salman that the Kingdom can send planes to transport Qatari pilgrims if Doha allows its citizens to perform Haj rituals. “But unfortunately, Qatar prevented its citizens from performing Haj. However, we welcomed those who managed to arrive in the Kingdom, and they are now with us performing Haj rituals,” he said, adding that the number of Iranian pilgrims for this year’s Haj season reached 86,000.

The emir said that as many as 250,000 civilian and armed personnel have participated in making this year’s Haj a resounding success. More than 110,000 members of the security forces and 32,000 health workers were on hand this week to maintain safety and provide first aid.

The Ministry of Municipal and Rural Affairs provided its services through 32,000 engineers, supervisors and cleaners, he added.

In a related development, Minister of Interior Prince Abdul Aziz Bin Saud Bin Naif visited on Thursday the Civil Defense Command facility in Mina to review its implementation of the Haj operation plan. He was briefed on the activities and services provided by the Civil Defense personnel for the pilgrims.

Meanwhile, Minister of Health Tawfiq Al-Rabiah said the pilgrimage had passed without any outbreak of disease. He said in a press conference in Mina that the health sector deployed 32,000 health practitioners, including doctors and paramedics.

As many as 25 hospitals and 135 health centers with a capacity of 5,000 beds were available in Makkah and the holy sites to serve pilgrims. The ministry also readied an integrated hospital on Makkah–Madinah Expressway, to provide emergency services for the returning pilgrims.