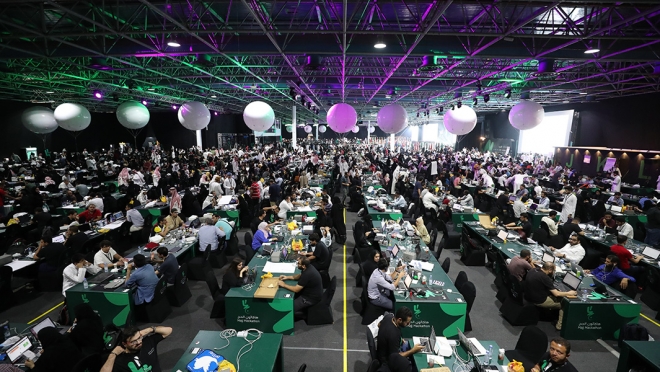 Thousands of software developers as well as computer and information-technology enthusiasts from more than 100 countries have taken part in a huge hackathon in Saudi Arabia.

The Hajj Hackathon in Jeddah, Saudi Arabia, ran from 31 July-3 August and featured a successful record attempt by the Saudi Federation for Cybersecurity, Programming and Drones (Saudi Arabia) for Most participants in a hackathon with 2,950 people taking part.

The three-day gathering was held to propose new ways to adapt technology to make the Hajj a more comfortable and enjoyable experience for all who come to practice it.

The Hajj season is the greater Muslim pilgrimage to Mecca, which takes place in the last month of the Islamic year. All Muslims are expected to make this journey at least once during their lifetime if they can afford to do so and it is one of the Five Pillars of Islam.

Advisor at the Royal Court and Chairman of the Board of Directors of the Saudi Federation for Cybersecurity, Programming and Drones, Saud Bin Abdullah Al-Qahtani said: ''The Kingdom's entry into Guinness World Records through the Hajj Hackathon confirms the aspirations of the Saudi youth for their country to be the gateway to technology in the region, pointing out that this is in line with the Kingdom's Vision 2030, as an ambitious vision that takes the Kingdom to a quantum leap in all aspects of life.”

The event’s highlight was a competition that includes different sectors in relation to the Hajj season such as food and beverages public health, financial solutions, transportation, crowd management, traffic control, travel and accommodation, waste management and communication solutions.

The Saudi Federation for Cybersecurity, Programming and Drones set different prizes for the top three winners.

The Hajj hackathon event in Saudi Arabia broke India's 2012 record for the most simultaneous participants in a hackathon, which had a total of 2,567 participants.