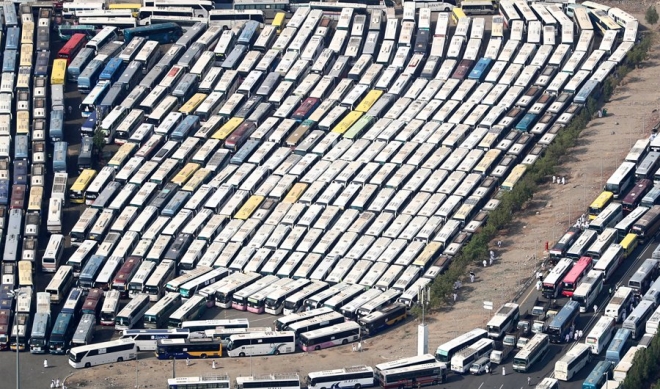 MAKKAH: Shuttle buses to the holy sites in Makkah were introduced 23 years ago to help Hajj pilgrims get around, increase capacity and reduce traffic.

The project is one of the pioneering ideas developed and launched by the Custodian of the Two Holy Mosques Institute of Hajj and Umrah Research over the years.

Dr. Othman bin Bakr Qazzaz, head of the Research and Studies Department at the institute, said King Salman’s government makes every effort to help pilgrims perform Hajj with ease, peace, safety and security. The institute was established to assist with this, and has carried out many studies and research projects, the most important of which resulted in the shuttle buses being introduced in Makkah.

The initial bus project took place in 1995, he added, involving the National Tawafa Establishment for Pilgrims of Turkey and Muslims of Europe, Americas and Australia. It was designed to find a way to reduce traffic on the roads used by pilgrims to travel from Arafat to Mina, and protect pedestrians from the risks posed by vehicles.

Special bus routes were set up to help pilgrims quickly move from their camps to Muzdalifah, Mina and Arafat. The project was a great success, Qazzaz said, in helping pilgrims travel safely and quickly from Arafat to Mina.

He said the service not only connects pilgrims’ camps with the holy sites but other parts of the city as well, and operates during Hajj and Umrah seasons.

This year, the buses began transporting pilgrims from Arafat to Muzdalifah on Aug. 20.

The shuttle bus center has space for 2,000 buses, while the roads are closed to other traffic and no vehicle can enter without authorization.

Pilgrims are transported from Arafat to Muzdalifah in less than 20 minutes and the total trip, including loading and unloading, takes less than 50 minutes.

Previously, the journey could take between four and five hours, given the millions of people traveling at peak times. The buses also help the environment, reducing air pollution by restricting the number of vehicles on the roads.