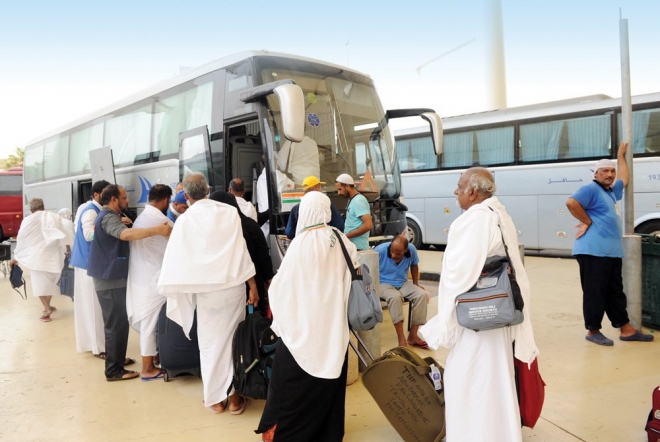 MAKKAH: The first Saudi syndicate of cars, founded 88 years ago in Makkah, led to a dramatic change in the pilgrims’ transport system, and the term “syndicate” at the time marked the birth of the transport foundations of a civil state, led by the Kingdom’s founder, the late King Abdul Aziz.

It has been almost nine decades since the true establishment of this system, which has changed a lot about transportation in Makkah and opened new doors for achieving convenience for pilgrims, who used to struggle along rough roads to reach Makkah.

King Abdul Aziz had taken it upon himself to ensure the convenience of pilgrims and provide them with all that could help them overcome difficulties on their way to performing Hajj and Umrah. At the time, cars and buses breaking down on the road was a major frustration for pilgrims, which inspired the establishment of the first syndicate of cars in the modern history of Saudi Arabia.

“Cars used to sink and get stuck in the sand,” was how the general president of the General Syndicate of Cars, Abdulrahman bin Mayouf Al-Harbi, started his speech about the syndicate’s history.

Al-Harbi said: “It wasn’t an easy task as the roads were not paved back then and cars broke down on the road and sank in the sand and the mud, but today, we have a fleet of thousands of well-equipped buses.”

The syndicate’s president explained that King Abdul Aziz started changing the transport system during the early days of the Saudi era in the first half of the 1940s. He allowed cars to be used for serving pilgrims, and people eagerly bought cars and rented them to pilgrims. The government then established several companies to contribute to this new field.

He added: “During those days, harnessing a car system in Makkah was not easy as the infrastructure was not ready, and using it came with many challenges, most important of which was the lack of well-trained drivers and workshops for repairing cars.

“Drivers from Yemen, Sudan, Egypt, and India were hired to establish and form a system at high wages to facilitate pilgrims’ transportation despite the roughness of the roads and the lack of paved paths for vehicles. The roads were later prepared after vehicles continuously sank and got stuck in the sand.”

Al-Harbi highlighted that 1940s cars had been used in transporting pilgrims at the time, with spare parts imported from Egypt, India, and Sudan.

He also pointed out that the road from Madinah to Makkah was rough and sandy, and the trip took two to three days as the cars kept breaking down on the road between Madinah and Jeddah with no car repair shops on the sides of the road.

“All of these facts prompted the Saudi government to establish the first syndicate of cars to protect pilgrims from road difficulties and dangers,” he continued. “Car rents were paid to the syndicate, which distributed clients over car rental companies based on how many cars a company owned.”

Al-Harbi pointed out that the General Syndicate of Cars set up conditions for registered cars so that the minimum number of cars a company employed was 20. In addition, the syndicate hired engineers to examine cars before authorizing them to operate and obliged car convoys to be accompanied by ambulances and spare parts, which ensured pilgrims’ safety. The syndicate also ensured that there was no competition between car owners and companies as these caused trouble and loss.

He added: “To eliminate competition, the government decided to unite all car rentals under one institution that car owners and companies joined, and it was called the Arabian Automotive Company.

“Years later, the company was unable to keep pace with the growing demand on cars, so it failed to fulfill its mission. Furthermore, transporting pilgrims to Arafat was a real problem: The government often contributed its cars to help transport pilgrims, especially when the holy places were extremely cramped.”

Al-Harbi said that in 1953, the government allowed Saudis, whether companies or individuals, to contribute to transporting pilgrims, and the General Syndicate of Cars was formed for the second time to perform the tasks of the first syndicate, which operated in the 1940s, and companies began joining it after some companies left the market while others merged until there were only 5 companies at the time.

He also explained that in 1973, when the government found that pilgrims’ transport companies owned 1,353 buses that failed to meet the rising demand, it provided a fleet worth more than SR3 million and divided it between four companies, who paid the government back in installments deducted from their revenues for 15 years.

As the government continued to support pilgrims’ transport companies, the number of the syndicate’s member companies reached 11 with a fleet consisting of 10,811 vehicles employed during the 2001 (1421 AH) Hajj season, in addition to 1,855 buses a few companies rented to support their fleets.

Al-Harbi stressed that the great support provided by the government to the sectors involved in serving pilgrims motivated them to continue to improve their performance and tools every year.

He highlighted that the syndicate will continue to make every effort to transform serving pilgrims into a hospitality industry and build a strong system of Hajj and Umrah services and economies to achieve Vision 2030 through the National Transformation Program.

Al-Harbi said the syndicate’s operational plan was focused on providing a complete fleet of modern, sophisticated buses provided by 34 transport companies that operate under the General Syndicate of Cars.

He confirmed that appropriate transportation would be provided to pilgrims from their arrival locations to their destinations in Makkah, Madinah, or the holy places.

He added that the operations department at the syndicate employed one-way, two-way, and frequency transportation, in addition to providing e-services and the supporting infrastructure.