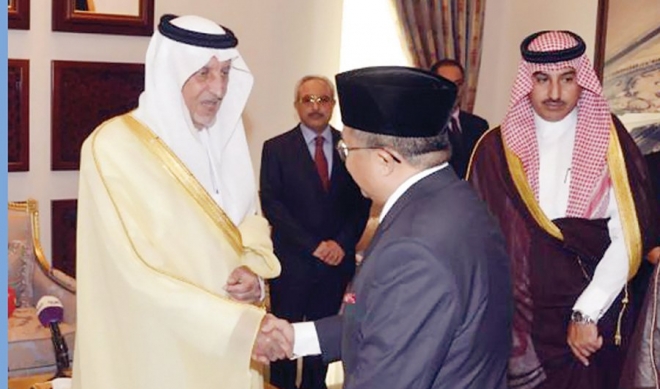 JEDDAH: Prince Khaled Al-Faisal, governor of Makkah and chairman of the Central Hajj Committee, said on Sunday during a meeting with the heads of consular missions in Jeddah that Saudi Arabia would do its utmost to serve pilgrims.

The goverment would ensure they enjoy more comfortable and easier Hajj and Umrah trips, he said.

Heads of consular missions in Jeddah visited Prince Khaled Al-Faisal in the municipality to congratulate Saudi Arabia on the success of the 2018 (1439 AH) Hajj season and thank the Saudi government for the services it provides to pilgrims.

During the meeting, Prince Khaled Al-Faisal said: “On behalf of King Salman, the crown prince and the minister of interior, I thank you all and congratulate you on the success of this year’s Hajj season, which was the result of all our efforts combined. If not for your countries and communities’ participation and everyone’s efforts, we would not have reached this success.”

He pointed out that Saudi Arabia’s government and people are honored to receive and serve pilgrims.

The governor of Makkah thanked all Muslim countries who played a role in the success of this year’s Hajj through informing pilgrims and raising their awareness about the Saudi laws and regulations before coming to perform Hajj.

He added: “We appreciate all of your countries’ efforts in this regard and wish for your contribution in informing pilgrims about Saudi Arabia and its laws to continue.”

Prince Khaled Al-Faisal reiterated that the Kingdom, led by King Salman, is eager to do its utmost to ensure the success of Hajj and develop Makkah city and the holy places.

He highlighted that King Salman has established the Royal Commission for Makkah and the Holy Places, chaired by Crown Prince Mohammed bin Salman, to facilitate Hajj and Umrah procedures and develop the holy places.

He also said the commission would implement large projects and would soon announce its program in the field.

Prince Khaled Al-Faisal asked Allah to help everyone to turn Makkah and the holy places into smart sites that employ technology as a key element for overcoming all difficulties that face pilgrims from the moment they arrive in Saudi Arabia and until they return to their countries.

“I also thank all government, civil, and voluntary bodies that participated in this year’s Hajj season and contributed to its success,” he concluded. “We promise to do our utmost to serve pilgrims and provide them with more comfortable Hajj and Umrah trips.”

On behalf of the heads of the consular missions, Ambassador Ali Mohammed Al-Ayashi, dean of Consular Corps and consul general of Yemen, said: “I am honored, on behalf of myself and my colleagues the heads of consular missions in Jeddah, to congratulate King Salman, Crown Prince Mohammed bin Salman, the minister of interior, the minister of Hajj and Umrah, and the Saudi government and people on the outstanding success of this year’s Hajj season.

“I also thank Saudi Arabia for the expansion of the holy places, large projects, and technology updates as well as the services and excellent organization that allowed pilgrims to perform Hajj rites with ease.”

Ambassador Jamal Bakor Balkhoyor, director general of the Saudi Ministry of Foreign Affairs in Makkah, said: “On behalf of myself and the consuls in Makkah, I congratulate you on the success of this year’s Hajj season, which was unique by all means.

“On behalf of the consuls and the countries they represent, I thank the Saudi Government and leadership for the services provided to pilgrims.”

Balkhoyor concluded: “It is a great honor that all consuls are expressing their countries’ admiration and appreciation for the great projects carried out every year to develop the holy places in Makkah and Madinah and ensure an easier Hajj for pilgrims.”