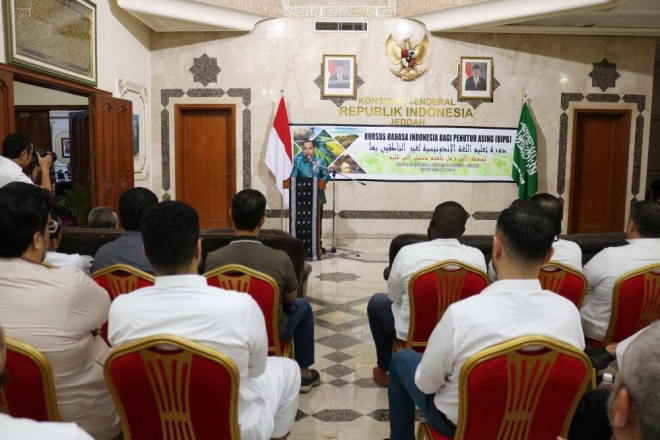 The opening session of the 14th edition of the program on Monday was attended by the consulate officials and 62 participants, who have been selected for the program. An experienced language instructor recruited from Universitas Negeri Semarang (State University of Semarang, Indonesia) was also present at the function.

In his opening remarks, Saripudin revealed that the consulate witnessed a growing interest among Saudis and local expatriates to learn Bahasa Indonesia (the Indonesian language). He said the program was normally conducted once a year, but this year it was offered twice with so many inquirers approaching the consulate.

«Considering the increasing demand to learn Bahasa, we are doing our best to launch the program for a second time this year,» said Saripudin.

With over 1.2 million Indonesian visitors to the Kingdom for Haj and Umrah as well business this year and increasing business contacts between Indonesia businessmen and their Saudi counterparts, mastering Indonesian language will surely offer greater business opportunities for its learners, Saripudin said.

He added that the initiative would enhance travel and tourism ties between the two countries and contribute to the success of the Saudi Vision 2030, one of which is the development of the tourism sector where the mastery of foreign languages like Bahasa Indonesia is highly needed.

«Our program is in line with the Kingdom›s plan to offer a wide range of tourism options to visitors, from religious tourism to visiting the historical wonders. This will definitely promote business activities for the local economy,» Saripudin said.

Addressing the function, Ahmad Syofian, the program coordinator, said within two weeks, the consulate received 107 applications, but only 62 applicants qualified for the program and 50 of them were Saudis.

To be admitted to the program, applicants are required to fill out a registration form in which they have to cite their purposes or strong reasons of learning Bahasa.

A certificate of completion is awarded to eligible participants after the course is over. Syofian reminded the students that to succeed in learning Bahasa as a foreign language requires a great amount of effort, patience and practice.


⇐ Previous:
Hasina heading home after Umrah, meetings with Saudi king and crown prince - bdnews24.com
Next: ⇒
Over half a million Umrah visas issued so far