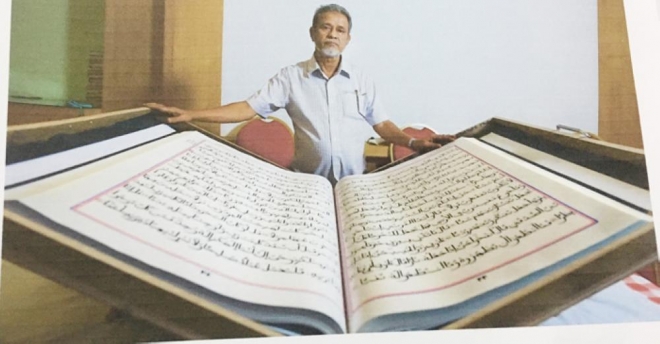 JEDDAH — A manuscript copy of the Holy Qur’an, claimed to be largest in the world, will soon be donated to the library of the Grand Mosque in Makkah. Mammed Chatholiparambil, a telecommunications engineer who has retired from Bharat Sanchar Nigam Limited (BSNL) — the state-owned telecommunications company of India — has completed the laborious task singlehandedly. It took six full years for him to fulfill the lifelong dream of penning down the entire verses of the holy book. He has also plans to apply for having an entry into the Guinness Book of World Records.

Mammed, who hails from Perinthalmanna in the Malappuram district of the southern Indian state of Kerala, told Saudi Gazette that it was a dream, which he had cherished for over half a century, come true with the completion of the unique mission. Immediately after retiring from government service, he devoted fully to writing down the verses of the Qur’an, one chapter after another, in complete uniformity with the Othmani script of the holy book. Through trial and error, he finished the clean manuscript, which is now undergoing meticulous scrutiny and close verification with the printed copies of the Qur’an in Othmani script.

Mammed started the work in January 2013 after his retirement from service. He used Rocco calligraphy 20 mm pen to prepare the manuscript copy, which has a weight of 38 kg. Recalling his tireless efforts to complete the project, Mammed said that it was very simple while compared to the great strain and sacrifices made by the Companions of the Prophet (peace be upon him) for the collection and compilation of the Qur’an at the time of its revelation and afterwards.

The Holy Qur’an was orally revealed to Prophet Muhammad (PBUH) through the angel Jibreel spanning over 23-year-period of his prophethood. During the period of the Prophet (PBUH), the divine message was not compiled into the book form but instead the revelations were preserved in the memories of his companions. Parts of it had also been written down on parchment, stone, palm leaves and the shoulder blades of camels. The written compilation of the holy book into a manuscript was made only after the death of the Prophet (PBUH).

Abu Bakr, the first caliph, ordered the collection of all Qur’anic material in the form of a book, and the final authoritative written form (the Othmani Script) was completed and fixed under the direction of Othman Bin Affan, the third caliph of Islam. This text was standardized under Othman Bin Affan and regards it as the exact record of the revelations that were delivered to the Prophet (PBUH).