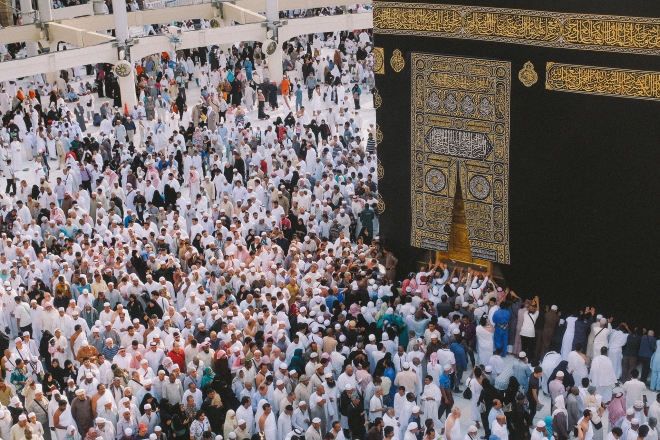 I have found myself contemplating death ever since I returned from Hajj a few months ago. People perform Hajj to fulfill a religious obligation to God, to renew their faith in God, and to experience a sense of community with Muslims from around the world. In this sense, Hajj is life-affirming, yet my time in God’s House has brought death to the forefront of my mind.

These sobering ruminations on my mortality unnerved me. Death is not something I normally reflect on; I am an educator and an aspiring professor, so I spend the majority of my time thinking about the possibilities and potential of youth. I find joy in the enthusiasm of my students and in seeing the idealism that animates their lives. And as  Muslim daughter, I focus on how I can live my life fully and ethically and make my parents proud.

Despite the focus on living, at 27-years-old, I am no stranger to near death experiences. In 2013, my father almost died from a rare and life-threatening condition known as gallstone necrotizing pancreatitis–one in 100,000 people in the U.S. develop this condition. The mortality rates are strikingly high, but despite these alarming statistics, my father is still alive and well today– a life-affirming testament that miracles do happen to ordinary people.

Still, the five days in the hospital when we sat near him, watching him breathing raggedly on a ventilator, with his abdomen sliced open for further surgery, injected the fear of death into my heart. I held my father’s enervated hand, terrified of a future in which I would not have him to listen intently to the events in my life in a way that only a parent can do. A future in which my father would not watch me get married or have kids or pray for me through my adult life. I have never poured my heart into supplication as I did then. Death was an enemy which had to be vanquished. And vanquished it was, for God answered my prayers.

Five years later, I still fear that my parents will die and leave me with a profound loss that will remain my constant companion. The idea of navigating this world without their presence, prayers, and love is terrifying in its loneliness. And this anxiety that I will not be able to cope if my parents pass away before I am ready was a fear I carried with me when I boarded the plane for Hajj. I performed Hajj with my mother, my brother and my father by my side. My father too was afraid. His last direct ancestor to perform Hajj in the mid-1800s, his paternal great grandfather, Haji Sabr Mondol, had died and been buried at sea on his return home from Hajj. Since then, no other direct ancestor of my father’s had performed the pilgrimage. It may seem superstitious, but my father worried that if he went on Hajj, he too would die.

Our fears escorted us to Mecca, and although I tried to concentrate more on my hopes than my disquietude, I could not avoid the centrality of death in the Hajj rituals. I found myself visiting the graves of the deceased companions of the Prophet. And I stood with other pilgrims for the janazah prayers (prayers for the deceased) that are said after each of the five daily prayers to honor the people who died while performing the pilgrimage; since millions gather for Hajj each year, there are thousands who die due to old age, physical exhaustion, or sickness while completing this sacred ritual. During their burial, the deceased male pilgrims are wrapped in the white towels, the ihram, in which they came ready to stand before God during the Day of Arafat (the day of prayer and absolution).

On the day the Hajj rituals concluded, my father too asked my mother to wash his ihram and pack them carefully, as they were the clothes he wanted to be buried in when the time came. There was something about his comment that caused all my fears to well up to the surface. I was struck by the placid manner in which he spoke these words. Was he not the same man who had been afraid to perform Hajj, the same man who had come back from near death only five years ago?

Along with my puzzlement at my father’s newfound serenity, I also wondered at how quotidian the janazah prayers became during Hajj; they had been seamlessly incorporated into the five daily prayers. Why did God command death to be so intimately connected to the rituals of Hajj? Pilgrims expect to go on with their lives after performing Hajj, yet here were people of all ages eagerly looking forward to the possibility of dying during their pilgrimage.

The only answer I could muster was that there must be something liberating, and not just terrifying, about death. Perhaps death becomes easier when believing people see it simply as the transition to the Afterlife where they will be reunited with God. It is not that worldly life holds no appeal for them—it does, and they very much desire health, relationships, and prosperity. However, it is that what comes after this earthly life is equally, if not more, desirable to them. After all, for those who believe in God and strive to live kind, God-conscious lives, the next realm holds the promise of everlasting peace, whereas no soul can escape some degree of pain and suffering in this, our worldly existence.

But surely, I thought, there must be moments of fear amidst the pilgrims at the prospect of leaving the world as they know it. There must be a profound sadness at leaving their loved ones behind. But what must overcome this natural fear and sorrow is the comforting realization that God awaits on the other shore and that if their loved ones believe, they too will be reunited across the waters. This profound realization does not come easily but is a belief cultivated through years of believing in a loving God.

Though I still feel uneasy at the thought that one day death will bereave me of my parents, the pilgrims, especially my father, taught me that death is a transition, not an end. And it is this thought alone that makes contemplating the inevitable passing of my loved ones somewhat bearable for me. Our love for our family and friends will not end here – it will lead us to God and to the life beyond.