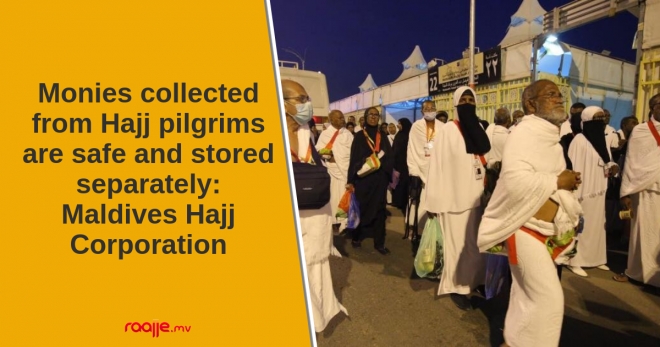 The Maldives Hajj Corporation has said that all funds collected from pilgrims are stored in a separate account and remains safe, refuting recent claims made by the Joint Opposition’s transition committee.

The transition committee said at a press conference this week that money collected from pilgrims had been illegally used for purposes other than intended, costing them a total of MVR 20 million.

The Hajj Corporation said in its statement on Thursday that all funds are kept in an account separate from the ones used for its operations and that they have not been used for any purposes.

The corporation said that it is currently keeping funds covering total pilgrimage costs for 1,817 individuals and asks the public not to be alarmed by the allegations, denouncing them as false.

The statement says that none of the individuals who have paid the corporation for services and other Hajj expenses have any reason to be concerned.

The committee said that a total of 20 million paid by pilgrims is unaccounted for and that this amount is enough to cover Hajj expenses for 300 pilgrims.

In Thursday’s statement, the Hajj Corporation also said funds not received by them and so unaccounted for in their books are the victims of the ‘Maleesha’ scam.

In 2015, the Criminal Court heard charges against local pilgrimage agency Maleesha Hajj Group and its chief Ismail Abdul Latheef. Latheef and his partners were accused of swindling MVR 8.6 million from 1,256 pilgrims in a scam orchestrated and carried out in 2012.

The Joint Opposition’s transition committee is a body comprising of several sub-committees that have been working to ascertain the status of 29 state-run companies ahead of transitioning governments, given President Abdulla Yameen loss to the coalition’s common candidate in September’s ballots.

The Hajj Corporation was established by former president Mohamed Waheed Hassan Manik, as part of his government's crackdown on similar scams aimed at Hajj and Umra pilgrims. Such scams are extremely commonplace and Aishath Muneeza, the then chairperson of the corporation had even said that private Hajj groups should not be allowed to operate.