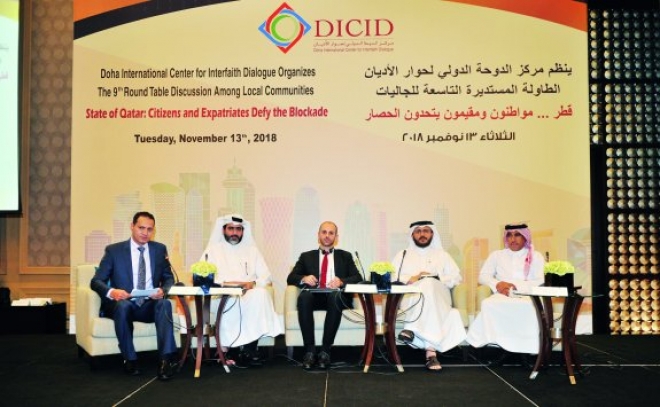 DOHA: Haj tour operators working in Qatar faced losses amounting to over QR30m during the 2017 season of Haj due to siege, said Yousef Ahmed Al Kuwari, spokesman for the Haj and Umrah agencies of Qatar.

“Before 2010, the number of quota to Qatar was 10,000 pilgrims and it started decreasing year after year until it reached to 1,500 pilgrims, which means the Saudi Arabia intended to put many obstacles to Qataris since a long period,” said Al Kuwari.

He also addressed the challenges of the siege, including the politicisation of Haj and Umrah, the harassment of citizens and residents and obstacles placed by the Saudi authorities to deprive them from performing these rituals. He was speaking at the 9th Roundtable Discussion among Local Communities organised by Doha International Center for Interfaith Dialogue (DICID) on Tuesday.

Chairman of DICID, Dr Ibrahim bin Saleh Al Nuaimi said that blockade revealed the authenticity of Qatari citizens and the honourable stances of residents who have shown the utmost discipline, taking into account exceptional circumstances.

“Although the siege caused shock and anxiety at first, when all the unfair decisions and procedures where taken against Qatar,” said Dr Al Nuaimi. He said residents (expatriates) surprisingly stood in solidarity with the citizens and have shown enough responsibility and challenge to face this unjust siege, defending the sovereignty, independence, rights and resources of the country. Dr Al Nuaimi said the periodic round-table meetings held by the Center discusses social issues concerning communities in Qatar and its society in all of its components.

In his opening speech under the title “State of Qatar: Citizens and Expatriates Defy the Blockade”, Al Nuaimi said the event comes in time for the International Day for Tolerance which is annually held on November 16, an initiative to remember the values of coexistence, harmony and the building of world peace. He said the siege crisis is one of the most important issues facing the residents of Qatar, citizens and expatriates. “Hence, the Center chose it as a title for the ninth roundtable, as it represents a high priority and a real challenge for Qatari society to positively interact with it.”

At the opening session, Archbishop Makarios of Qatar touched on the resistance of the citizens and residents towards the challenges of the siege, which he asserted has failed and has not succeeded in achieving any of its objectives.

Representatives of a number of stakeholders from Ministry of Interior, Ministry of Commerce and Industry, Qatar University, Hassad Food Company and the Haj and Umrah campaigns of Qatar addressed the two topics.

The participants said since the beginning of the crisis, Qatar has adopted a rational stance by calling for dialogue to resolve differences, and has taken many measures at all levels through specialised international bodies and organisations to ensure its interests and the rights of its people.

The second topic tackled ways to meet the challenges of the siege and invest all energies in the future, in terms of participating in launching factories and local projects to provide self-sufficiency, in addition to increasing foreign investment, legal prosecution of the siege countries, request of compensation for those affected, issuance of Qatari laws on permanent residency for residents and the promulgation of the law on political asylum.