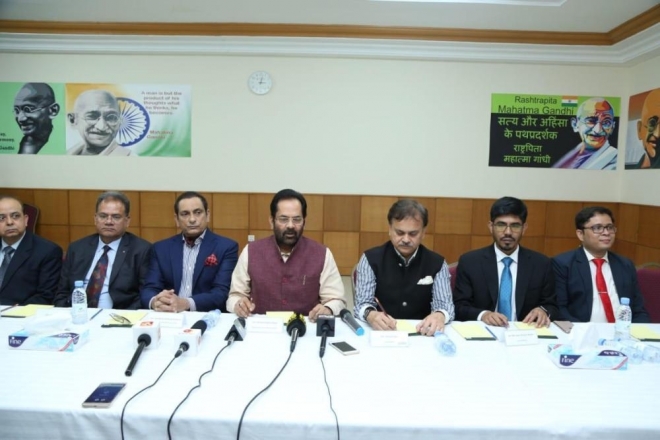 JEDDAH – India expects an increase of 20,000 in the quota of pilgrims for the Haj of 2019, according to the country’s Minister of Minority Affairs Mukhtar Abbas Naqvi.

Naqvi said a total of 170,000 Indian pilgrims performed the last Haj, and this number included 45,000 who came through private tour operators (PTOs).

Naqvi made the remarks while addressing a press conference at the Indian Consulate on Thursday after signing the bilateral agreement with Minister of Haj and Umrah Muhammad Saleh Benten. He said more than 300,000 aspiring pilgrims applied for the next Haj and the deadline for submission of applications has extended by another week to Dec. 19, following requests from Haj committees in some states.

Naqvi said this year preparations for Haj in India are very advanced and the process of receiving Haj applications started two months earlier. “Signing of the Haj agreement was also one month ahead compared to last year,” he said, stating that there will be 21 embarkation points and Calicut, in the southern state Kerala, is restored as an embarkation point after a hiatus of several years.

Naqvi thanked Custodian of the Two Holy Mosques King Salman and Crown Prince Muhammad Bin Salman for the excellent arrangements that made the Haj of 2018 a great success. “During the talks with the minister and other senior ministry officials, we have assured our full cooperation and support to ensure a smooth and hassle free Haj in 2019,” he said.

Naqvi hoped that the Indian pilgrims can avail of the Proof of Concept (POC) pre-clearance of immigration facility at their embarkation points under the Makkah Road scheme. “Discussions with the Saudi authorities are going on this respect, and some important issues are there but we are very much confident that Indian pilgrims would also be the beneficiaries of this scheme for the next Haj,” he said, adding that discussions are on with regard to provision of the Haramain High Speed Train facility for the Indian pilgrims for their travel between Makkah and Madinah.

Referring to the move to resume pilgrimage by the sea route, Naqvi said the Saudi government gave last year the go-ahead in this regard and accordingly the Indian authorities had floated a global tender. “Our ministry had already received a number of tenders and we also floated a fresh global tender this year. We will finalize the modalities for the ship service to resume for the Haj of 2020 as it would be very helpful in cutting down the Haj costs significantly,” he said.

The Indian minister said there had been a substantial increase in the number of women applicants this time, and their percentage ranges between 40 and 47. There is also an increase in the number of women who wanted to perform Haj without a mahram (accompanying husband or male blood relative), reaching more than 2,000. A total of 1,300 women pilgrims performed Haj without a mahram for the first time in 2018.

Naqvi also unveiled plans to reform the PTO policy to make it more transparent and pilgrim-friendly, adding that the new policy for PTO is expected to be ready in 2019.