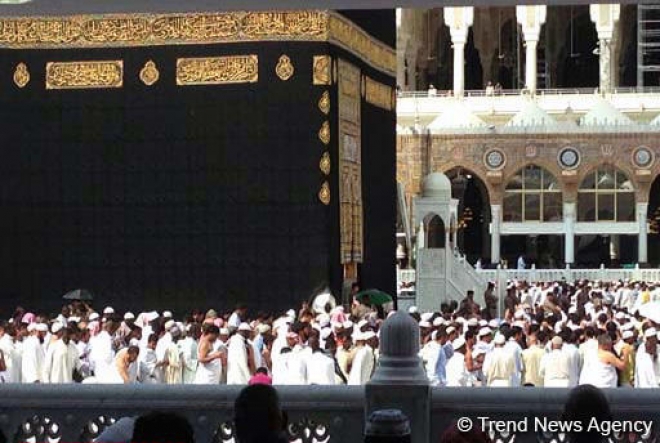 Meeting to discuss issues related to performance of Hajj 2019 took place in Dushanbe at the end of last week, an official source in the Tajik government told Asia-Plus in an interview, Trend reports referring to news.tj.

Presided over by Deputy Prime Minister, Azim Ibrohim, the meeting reportedly brought together senior representatives of relevant ministries and agencies.

Speaking at the meeting, Ibrohim noted that the main task of organizers of Hajj was in creating all necessary conditions for Tajik Haj pilgrims.

He reportedly ordered relevant government bodies jointly with local authorities to inspect living and financial conditions of persons who want to perform the Hajj next year.

Ibrohim, in particular, noted that they last year received complaints from pilgrims about cases of untimely provision of medical aid and poor training of heads of groups.

More than 6,200 Tajik nationals reportedly performed the Hajj this year.

The new age limit of 40 has been raised from the limit of 35 that was instituted in April 2015.

In 2011, the CRA designed a new Hajj uniform; men don two-piece suits, while women wear long-sleeved dresses complete with headscarves. The Tajik Hajj uniform is embroidered with the country’s symbols.

Each year, Saudi Arabia welcomes millions of Muslims from abroad traveling on Umrah and Hajj. Hajj, one of the five pillars of Islam, is a pilgrimage to Mecca which adult Muslims must make at least one in their lifetime, provided they are physically and financially able. The Hajj is a demonstration of the solidarity of the Muslim people, and their submission to God. The pilgrimage occurs from the 8th to 12th day of Dhu al-Hijjah, the 12th and last month of the Islamic calendar. Because the Islamic calendar is a lunar calendar, eleven days shorter than the Gregorian calendar, the Gregorian date of the Hajj changes from year to year.


⇐ Previous:
Pilgrims build ‘a path of peace’ on road to Makkah
Next: ⇒
Hajj, pilgrimage org.’s representative office to be launched in S Arabia