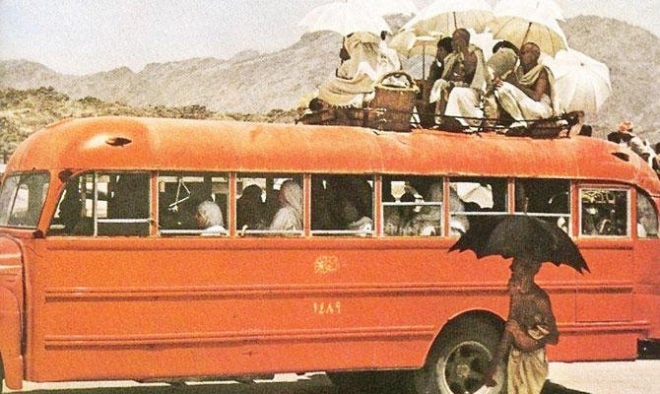 JEDDAH: Caravans of pilgrims from around the world can take many different routes to Makkah — but all paths lead to a single destination. Over the centuries, the ancient pilgrimage routes have brought great benefits in trade, cultural exchange and knowledge, with the journey acting as a bridge of peace and communication between Islamic lands.

The routes were not only used by Hajj pilgrims but throughout the year by travelers seeking to reach different destinations.

The most famous of the Hajj routes are the Iraqi, Syrian, Egyptian, Yemeni and Omani paths.

Muslim caliphs and sultans devoted special attention to Hajj routes. The Hajj emir, for example, was responsible for supervising Hajj, establishing stops and rests on the paths, and determining the distances between these stops.

Historical sources have recorded seven main routes to Makkah and Madinah. The Kufa-Makkah was the most important path for both Hajj and trade. This route was also known as Darb Zubaidah (the path of Zubaidah) and was named after Caliph Harun Al-Rashid’s wife, who helped to establish the route. Its use began after the conquest of Iraq and the spread of Islam across the Levant, and it prospered during the era of the Rashidun caliphate. In the Abbasid era, this route became an important link between Baghdad, the Two Holy Mosques and the rest of the Arabian Peninsula.

The route was well planned and engineered, with stops and rest areas. Utilities, such as wells, ponds and dams, helped make the journey easier for pilgrims.

After the era of the powerful caliphs ended, the road was targeted by rebel tribes and villages. Some of the road’s stops, such as Rabazah station, were damaged and destroyed and, subsequently, the roadmap was lost and pilgrims ceased to use it unless they were well-protected.

After the Mongols conquered Baghdad in the early 13th century, the road was disrupted and most of its stations destroyed.

Studies showed that the architectural structures on the Kufa-Makkah route represent a unique Islamic architectural style, with meticulous design and high-quality workmanship. Palaces and bars on the road were built with thick walls, and offered superb facilities and services. The ponds were built in rectangular, square and circular shapes, reflecting Muslims’ skill in building water facilities.

The Basra-Makkah route, the second most important Hajj pathway, passed through Wadi Al-Batin in the northeast of the Arabian Peninsula, crossed several deserts, and ran parallel to the Kufa-Makkah road until the two paths met at Umm Kharman station in Awtas, 18 km from Zat Irq.

The route is about 1,200 km long and has 27 main stops, four of which are now inside Iraq and Kuwait, while the rest are inside Saudi Arabia.

The third route, the Egyptian Hajj path, was used by pilgrims from Egypt, Morocco, Andalusia and areas of Africa. They first headed to the Sinai Peninsula to reach Aqaba, the first stop on the route, before traveling on to Midian. After reaching Midian, Egyptian pilgrims turned to one of two paths, one inland road and the other coastal.

Throughout the Mamluk and Ottoman eras, caravans of pilgrims from Egypt would gather in Barakat Al-Hajj, near Cairo, then travel through the Suez path, passing through Buwaib and Ajrud until they crossed the Sinai Peninsula to the Gulf of Aqaba. They would then descend the Negev of Aqaba to reach Aqabat Ayla.

Pilgrims’ caravans would leave Aqabat Ayla and journey to Badr. From Badr, the caravan would travel to Rabigh, then Khulays and Asfan before reaching Makkah after having spent a month on the road from Cairo to Makkah.

Hundreds of Arab inscriptions can be found along this route. These were carved by pilgrims on rocks surrounding the path to leave a reminder of their Hajj journey.

The forth Hajj route, the Shami, which connects the Levant to Makkah and Madinah, was also known as Al-Tabukiya as it passes through Tabuk. The route starts in Damascus and passes through Busra Al-Sham in Daraa.

The Yemeni Hajj route has linked Yemen and Hijaz since ancient times. Caravans departed toward Makkah from Aden, Taiz, Sanaa, Zabid and Saada in northern Yemen.

One of the Yemenis’ favorite routes passed through northern Yemen and crossed the mountainous region of Asir until it reached Taif and then Makkah. The road passed through difficult terrain, but pilgrims and other travelers preferred it because its numerous villages offered water and food.

The Omani Hajj route starts from Oman and passes through Yabrin, then continues through Bahrain, Yamamah and Dharih. According to geographical sources, pilgrims from Basra and Bahrain met in Dharih and, from there, separated. The pilgrims of Basra headed north, while Bahrain’s pilgrims headed east.

The Bahrain-Yamamah-Makkah Hajj route was an important branch of the Basra route, which passed through central regions of the Arabian Peninsula. Pilgrims traveling this route were offered protection against bandits.

Early Muslim geographers referred to the convergence of the Yamamah road and the Basra Hajj route since Yamamah has two paths to Makkah. One passes through Al-Qaryatayn while the other crosses Marat. After the Bahrain road meets the Basra route in Dharih, it passes through several stops, including Jadilah, Faljah, Al-Dfeinah, Qiba, Maran, Wajrah, Awta, Zat Irq and Al-Bustan, until it reaches Makkah.