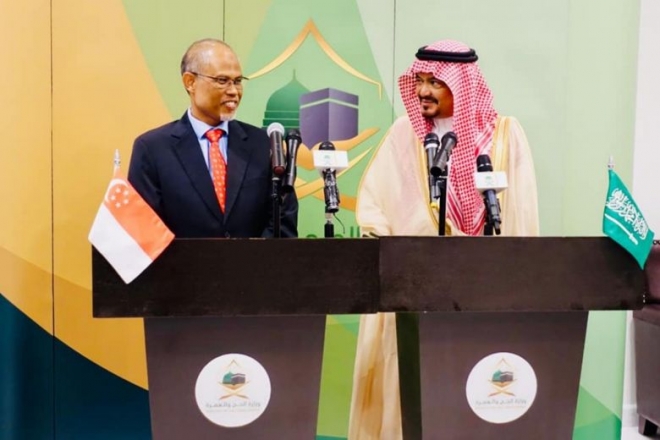 In a Facebook post on Friday (Dec 28), Mr Masagos said an increasing number of Singaporeans want to perform the haj, encouraged by better services.

The current quota for Singaporean pilgrims, set by the Ministry of Haj and Umrah of the Kingdom of Saudi Arabia, was increased from 800 to 900 places this year.

Said Mr Masagos: "Despite hosting more pilgrims, the hospitality and services are improving every year and this has attracted more and more Singaporeans to want to perform the Hajj. I appealed for more places to be extended to Singaporeans, so that our current Hajj waiting list can be reduced."

He also said he had met the Saudi Minister of Haj and Umrah, Dr Mohammed Saleh Taher Benten, and his deputy, Dr Abdul Fattah Mashat, where he discussed how Saudi Arabia has changed since he performed the pilgrimage for the first time in 1988.

Mr Masagos, who is also the Minister for the Environment and Water Resources, is currently in Saudi Arabia for the annual Haj Ministerial Meeting.

He arrived in Saudi Arabia on Tuesday and is accompanied by senior officials, including the chief executive of the Islamic Religious Council of Singapore (Muis), Mr Abdul Razak Hassan Maricar, and deputy chief executive of Muis, Mr Esa Masood.

Mr Masagos had earlier met Saudi Arabian governors, who told him that pilgrims from Singapore have behaved well and are respectful of rules when performing their rites in Saudi Arabia.

In a separate earlier Facebook post on Thursday, he said: "I was pleased to hear of praises from the governors on our Singaporean pilgrims, in terms of observing good etiquette and respecting the rules in place for their own well-being and welfare. I hope our Singaporean pilgrims will continue to fly our flag high in the years to come."

These comments came after Mr Masagos met Prince Khaled Faisal, adviser to the Custodian of the Two Holy Mosques and governor of the Mecca region, and his son Prince Saud Khalid, deputy governor of the Madinah region.

On Friday, Mr Masagos also thanked Saudi Arabia for the work that it has done to allow Singaporean pilgrims to perform their religious rites.

He said: "I commended the Saudi authorities who have rendered excellent services to Islamic Religious Council of Singapore (Muis) and Association of Muslim Travel Agents (Amtas) officials to ensure that our Singaporean pilgrims are able to perform their haj smoothly every year."