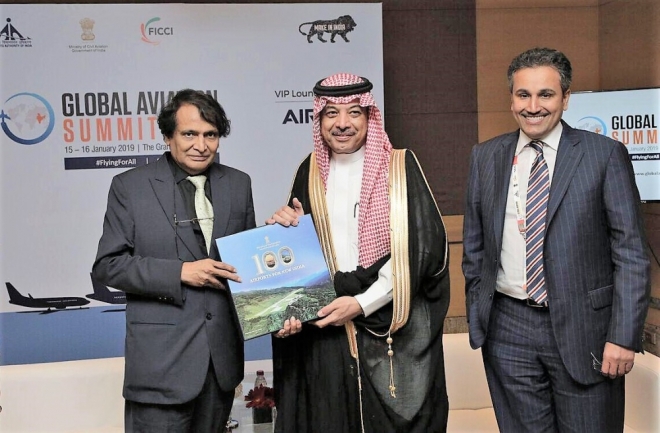 THE Saudi General Authority of Civil Aviation (GACA) concluded its participation in the two-day Global Aviation Summit 2019 that ended Wednesday in Mumbai, India. The summit was attended by the ministers in addition to civil aviation heads from around the globe.

GACA’s aim through its participation in this global forum is to strengthen relations between the authority in the Kingdom and the aviation authority in India, also highlight its various projects in the civil aviation and air transport.

President of GACA Abdulhakim Al Tamimi headed the Kingdom’s delegation where he met with civil aviation and commerce minister in India Suresh Prabhu. A discussion in the aviation industry and ways to improve support for airliners in both countries was held.

Al Tamimi, during a roundtable discussion entitled “Linking the World”, reviewed the great achievements made by the Kingdom in the field of civil aviation and highlighted the Kingdom’s vast experiences in that field.

During the discussion, he noted the big support that GACA provides to aviation security and safety regionally and globally. He gave examples of the financial, technical and moral support that the Kingdom provides to the ICAO programs. One of these ICAO’s program is the “No Country Left Behind” which the Kingdom contributed $1 million. This in addition to hosting and financing the permanent headquarters of MENA RSOO, plus organizing the Global Ministerial Aviation Conference that was held in 2016 with the participation of 54 countries, 13 organizations and 450 companies and witnessed 11 scientific sessions.

Al Tamimi also discussed the Kingdom’s interest in the Muslim population around the world and the effort put in facilitating the performance of Haj and Umrah. He cited the data that showed pilgrims arriving from outside the Kingdom making up to 94% of all pilgrims, and Umrah takers which amounted to 10.3 million in 2017. Moreover, according to the Kingdom’s Vision 2030, that number would increase to 30 million per year.

The Global Aviation Summit 2019 has attracted the participation of individuals with expertise and experience in the field of civil aviation at an international level. The summit highlighted the most important experiences and success stories amongst the participants. The ministers also discussed ways to ensure safety and security standards through a rapid and comprehensive environmental system. — SG


⇐ Previous:
Hajj airfare from Srinagar decreases by Rs 11,377 after GST cut
Next: ⇒
FNC urges the expansion of Hajj quota for Emiratis