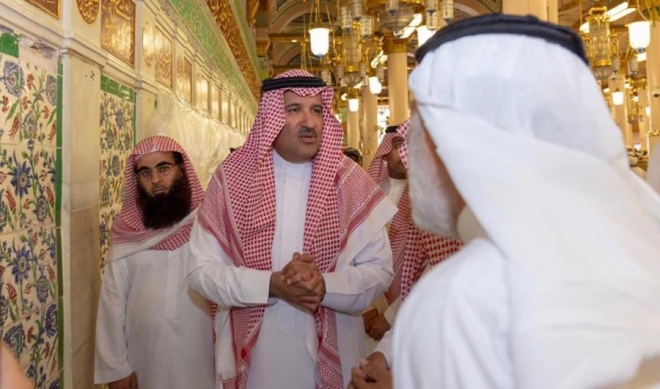 JEDDAH: Since its founding, Saudi Arabia has always sought to preserve the heritage and history of the Prophet’s Mosque, Madinah Gov. Prince Faisal bin Salman said during his inspection of restoration and maintenance work at the mosque’s southern wall.

He was accompanied by Sheikh Saleh bin Khalid Al-Muzaini, undersecretary of the General Presidency for the Affairs of the Two Holy Mosques; Waheeb Al-Sahli, undersecretary for Madinah governorate; and Fahd Albuliheshi, CEO of the Madinah Regional Development Authority.

Prince Faisal said the ancient decorative formations of the mosque’s southern wall have become more distinct since the removal of the wooden doors that covered the wall.

The restoration work was a joint effort by the General Presidency for the Affairs of the Two Holy Mosques, and the Madinah Regional Development Authority, he added.

The work was carried out according to the highest standards, with the help of foreign and Saudi experts.