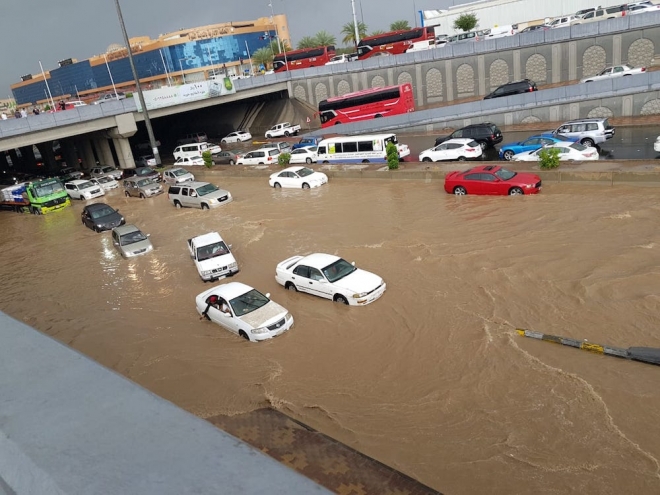 JEDDAH: Heavy rainfall and sandstorms in the Kingdom have led to flooding, school closures and poor visibility, authorities said Monday as they urged people to take precautions during the bout of bad weather.

Rain hit northern and western parts of Saudi Arabia on Sunday and Monday, while sand swept through major population areas to bog down the skyline.

Schools shut in Tabuk, Arar and Al-Jawf because of flooding and there was low visibility in Riyadh among other places.

Flooding in #Madinah on Monday caused chaos on the roads. In the north-west of #SaudiArabia, the Civil Defense (@SaudiDCD) said it rescued 65 people in Tabuk and Al-Jouf and 37 people west of Duba. (Video supplied)https://t.co/M7zAkZcGHb pic.twitter.com/oEkMpRfksT

Civil Defense said it had rescued 65 people in Tabuk and Al-Jouf and 37 people in Duba. It told people to exercise restraint while driving and take maximum precautions.

Passengers using @KAIAirport in #Jeddah are advised to check their flights for cancelations and delays. Rain, strong winds and dust are forecast by @PmeMediacen to continue. Flooding seen here in #Madinah has caused chaos for motorists (Video supplied)https://t.co/M7zAkZcGHb pic.twitter.com/dkJDrl2RWZ

The General Authority for Meteorology and Environmental Protection forecast rainfall in the north and west, and sandstorms or dusty winds in several parts of the Kingdom.

Thunderstorms are expected to be accompanied by gusty winds and dust, reducing visibility in Riyadh and the Eastern Region and resulting in lower temperatures.

In Makkah winds of 37 km/h are forecast, while in Jeddah wind speeds could reach 50 km/h.

Dust filled the air in Riyadh on Monday. (Iqbal Hossain)

Tabuk is expected to be mostly sunny, with a maximum temperature of 16 degrees Celsius.