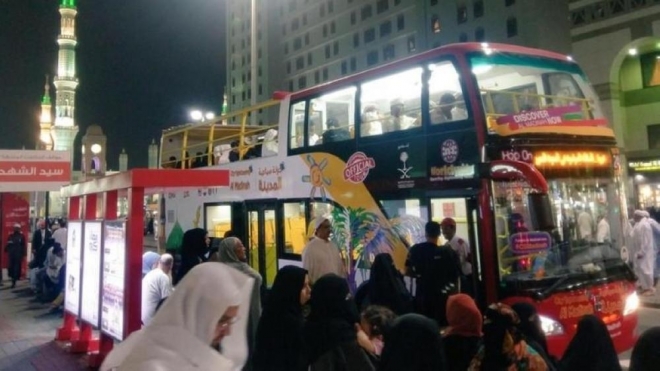 MADINAH — The hop-on and hop-off tourist buses, launched in the middle of 2017 to facilitate sightseeing in Madinah, are taking visitors to 12 historical locations in the Prophet's city.

The project came within the efforts of the Authority to Develop Madinah to promote tourism and enable pilgrims visit a number of historical and tourist sites.

In an hourlong trip, the bus will take visitors to the Prophet's Mosque, Al-Baqeea graveyard, Al-Manakha Square, Al-Salam Gate, the Uhud battleground, the Qiblatain Mosque, the location of the Battle of Al-Khandaq, the Quba Mosque and the Quba Road, in addition to other commercial and heritage sites.

The authority has provided a fleet of well-equipped double-decker buses for the project.

The tour service starts every day after the Fajr prayer from the Prophet's Mosque and will be available until after Isha prayer. The duration of each trip is one hour.

There will be tourist guidance in eight languages including the Arabic, English, French, Urdu, Turkish, Indonesian, Persian and Malay in the buses.

The tourists will be supplied with state-of-the-art earphones to listen to the guidance and descriptions about each location. The descriptions will include anecdotes related to the Prophet's life.

The authority will soon add four languages to the program so that more tourists can benefit from it.

The authority said the visitors and tourists could also benefit from various services along the route including malls, restaurants, coffee shops and others.