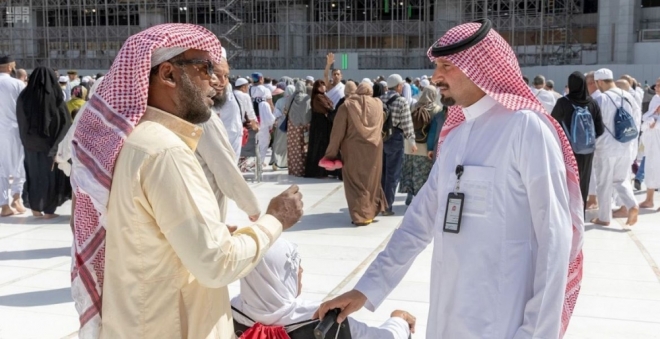 MAKKAH — As the holy month of Ramadan is round the corner, the General Presidency of the Two Holy Mosques Affairs has intensified efforts to provide the best services to the pilgrims and visitors of the Grand Mosque.

The Ministry of Haj and Umrah has stated that more than 5.5 million visas have been issued to people wishing to perform the minor pilgrimage since the start of the current season and the number is expected swell further with the approach of Ramadan, which is peak period of Umrah travel from around the world.

The services provided by the presidency include detecting and dealing with all kinds of negative phenomena, identify their locations and file continuous field reports to the authorities.

They also coordinate with the related authorities to study the negative phenomena and why they happen and lay out a plan to eliminate them.

There are more than 50 employees in this department who works 24/7 and provide and important service in dealing with the negative trends inside the Grand Mosque and its surrounding yards to achieve maximum results for efforts to provide the best of services and security to the visitors and pilgrims so that they can perform their rituals in ease and comfort.

The department also works in following up and reviewing the services provided by various other service departments inside the Grand Mosque. It also coordinates with the related authorities to deal with any negative trends found in the field.

They also provide religious advice in case they found something that goes against religion and ethical values. They also work on preventing barbers from cutting hair in areas that are not designed for the purpose like in Al-Marwa hill. Any equipment used in carrying out illegal activities will be seized and those responsible will be handed over to the related authorities to take legal action against them.

The presidency is also planning to expand the translation service for worshippers to listen to sermons and speeches in the Grand Mosque to 10 foreign languages.

The Department of Languages and Translation has been provided modern equipment and sound engineering technology to broadcast messages via radio frequencies covering all the areas of the Grand Mosque.

The department translates Friday and Eid sermons in different languages for the visitors and Umrah pilgrims, in addition to broadcasting the interpretations of Surat Al-Kahf in many languages every Friday morning.

The presidency currently broadcasts the translations in English, Persian, Indonesian, French and Urdu.

There are specialized linguistic committees and technical, engineering and administrative staff that monitor the translations to ensure accuracy.


⇐ Previous:
Road to access Makkah from its south in need of urgent repair
Next: ⇒
Pilgrims visit historical sites of Madinah