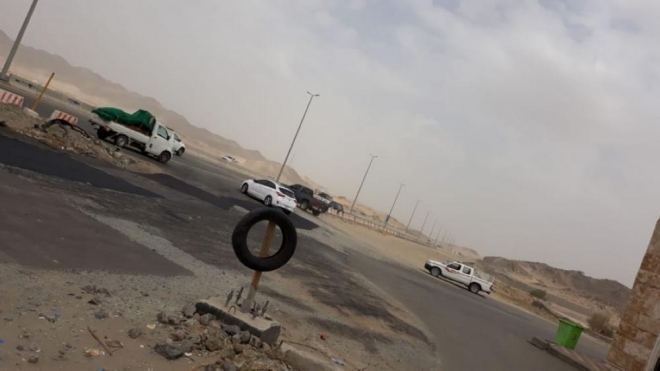 MAKKAH — The southern access to Makkah is quite important because a large number of pilgrims and visitors traveling via Al-Laith Road use it to enter the holy city, but the road is suffering from a perennial lack of maintenance and absence of services.

The last time the road received any repair work was more than two years ago. The service lane on one of the main entrances to the holy city is a dirt road, which was never paved and asphalted. There are no warning signs while concrete barriers line both sides of the southern access to the city.

According to people interviewed by Makkah newspaper, these concrete barriers were the reason behind many accidents on the road. Muhammad Al-Harthi, a resident of the Crown Prince development, said the condition of the road did not change in the past two years.

“The road was not built properly and it lacked maintenance. The road is witnessing a lot of accidents because of the concrete barriers, especially at night. Many cars, especially those driving at high speeds, overturned after crashing into these barriers,” Al-Harthi said.

He said being the gateway to Makkah from its southern side the road was important and required proper attention from the authorities.

Muteb Al-Zahrani, a resident, said people who were not familiar with the road and its exits to the neighborhoods often crashed into the concrete side barriers especially at night.

“There are no warning signs on this road that could alert drivers. The road has no lighting, nor has cat eye reflectors to guide the drivers. This road needs urgent repair and maintenance because it is used by thousands pilgrims traveling to Makkah every day,” Al-Zahrani added.

Khaled Al-Otaibi, manager of the Ministry of Transportation’s branch office in Makkah, said there was an ongoing project on the road and that is why concrete barriers were being installed along its sides.