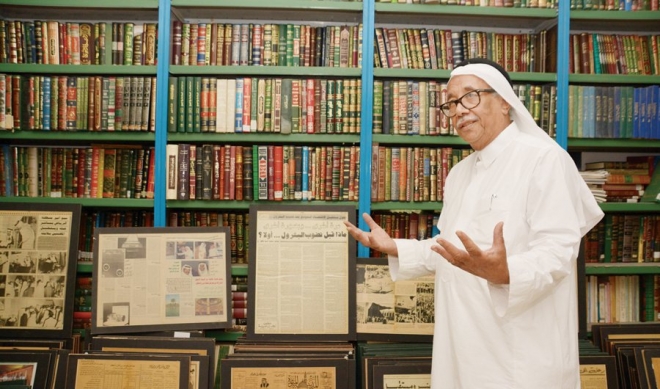 JEDDAH: An important part of Saudi Arabia’s history can be found in four apartments in Jeddah containing a million copies of old newspapers and tens of thousands of magazines, photographs and tape recordings.

Jaber Abdullah Al-Ghamdi, owner of the “Pages from History” museum, believes that if the country fails during the next 15 years to conserve the history recorded in its newspapers, it risks losing its national identity.

“Over the past 70 or 80 years, newspapers have documented our history and preserved our traditions. I have visited many ministries and governmental institutes and found they have no historical identity,” he said.

Al-Ghamdi named the Education Ministry and its Hajj and Umrah counterpart as some of these. He said that he had talked to the Hajj and Umrah minister about their official statements on the expansions taking place in the holy places.

“The Kingdom’s great efforts in that regard are quite obvious to visitors to these places or through TV channels, but what about the past? People everywhere would love to see how the holy sites, Hajj and Umrah were in the past,” he said. “Imagine a US newspaper has been covering Hajj every year since 1885.”

He said that his museum holds a press file documenting the Hajj since the beginning of the Saudi era.

“My words are based on documents; we have here a documented casebook about Hajj from 1925 to 2009. We also have statistics about pilgrims year by year. For example, these documents show that the number of foreign pilgrims in 1949 was 29,000 worshippers. When you say that you can now host millions of pilgrims, your efforts and achievements speak for themselves,” he said.

Al-Ghamdi stressed that what he holds in his museum is not merely newspaper pages. “They are more than papers, they are significant historical documents. When a news story of any kind, whether political, cultural or social, is published in a newspaper running under state supervision, this story becomes a reliable, official source of information, let alone after 50 years,” he said.

Al-Ghamdi started his documenting nearly 20 years ago, while he was a staff member of the King Abdul Aziz Public Library (KAPL) and the King Fahd National Library (KFNL).

“I used to buy archives and whole personal libraries from Egypt and many other countries and take them to the national libraries,” he said.

Al-Ghamdi, who is in his late sixties and is a father of four daughters and a son, said that his children — Dr. Farah, head of the immunology department at King Fahd Armed Forces Hospital; Dr. Samiha, who is studying political science; Shorouq, who is doing a master’s of science in nutrition; Ahmed, who is studying political science; and Basmah, a graduate of King Abdul Aziz University — support his passion for documenting history.

He said that he had left his mark on every corner at KFNL with book collections, photographs, documents and manuscripts he had added to the library. Al-Ghamdi recalls the day he needed to help a friend in authoring a book about literary works in the Hijaz region. He was shocked to find that he was allowed to access no more than two sources.

“That was in 1995, which was also my last day with KFNL. I started buying libraries and was lucky to find loads of documents about the founder of Saudi Arabia, King Abdul Aziz — accessing Hail, Al-Ahsa, reaching Taif, entering Jeddah, our relations with the Ottoman and British states, etc. They were nearly 1 million documents with inestimable value to the history of Saudi Arabia,” he said. Al-Ghamdi said that he immediately called the King Abdul Aziz Foundation for Research and Archives (Darah), which managed to collect the documents.

“That collection of documents was the missing link in the history of King Abdul Aziz,” he said.

As for the press pages that document the history of Saudi Arabia and its leaders, he said that he began with an archive of nearly 500,000 copies of newspapers — from the start of Al-Bilad newspaper, formerly known as “the Voice of Hijaz,” which was established in 1932, to 1960.

“I worked for more than eight to 10 hours a day till I managed to create reference collections about King Abdul Aziz and his sons. We, for instance, have prepared a 450-page file of documents on King Faisal that contains news, reports, achievements and the royal decrees he issued, from the time he was appointed crown prince to ascending the throne in 1964,” he said.

Al-Ghamdi added that these shed light on the achievements of King Faisal that were published in newspapers.

In the first symposium about King Saud, King Saud’s documented achievements, such as girls’ education, expansion of the Prophet’s Mosque, petroleum ministry and many more, were also displayed during the gathering, he said.

Al-Ghamdi told Arab News that King Salman is one of the Kingdom’s biggest newspaper aficionados.

“King Salman receives a daily report on newspapers. If you are a columnist and you write about the state, government entities, history of King Abdul Aziz or even lineage of a tribe in Arabia, never write what you are unaware of. Otherwise expect a correction reply or a telephone call from the king himself,” he said.

Al-Ghamdi said that his museum contains more than 2,500 newspaper pages about King Salman. “These pages document his first position as deputy governor and then governor of Riyadh in 1954-1955, through his career as defense minister, crown prince and king of Saudi Arabia. We have documented all his achievements. His relationship with his brothers, his undying connection with his sweetheart — Riyadh,” he said.

Al-Ghamdi remembers that he participated in an event about Saudi-Egyptian relations during the Mursi regime. Al-Ghamdi said that he displayed some of the newspapers articles about the role of Saudi Arabia in the Arab-Israeli war of 1973.

“It was only newspaper pages that mirrored that period. The Egyptian guests were in awe to know about the effective role of the Kingdom during that war. They said they had no enough idea about that,” he said.

He said that his archive of newspapers can help the ministry of foreign affairs in bringing to mind the financial support Saudi Arabia has provided to many countries.

Jaber Abdullah Al-Ghamdi says he needs 2,500 square meters to display the history of Saudi Arabia on all levels. ( AN photo by Huda Bashatah)

“When you talk about Yemen, for instance, these documents can prove that Saudi Arabia has spent SR300 million ($80 million) to establish a hospital in Saada, the home to the Houthis, who are fighting us now. The same can be said about Iraq and many other countries,” he said.

This work has so far cost Al-Ghamdi more than SR4 million ($1.06 million) but he is determined to continue to make new value out of old newspapers.

For Saudi Arabia, the museum can be a big historical project. If well-exploited, it can be no less important than the British Newspaper Archive (BNA), which contains millions of newspaper pages where online visitors can find hundreds of millions of articles by keyword. The massive project may also go digital — like the “Chronicling America” website that provides information about historic newspapers and select digitized newspaper pages.

Asked why he is working individually on such a big project, Al-Ghamdi said that he sometimes feel frustrated because of what he hears from family members and some friends.

“They always ask me why I am doing this without being supported or sponsored by a relevant private or government body. My answer is that it is my love for my country that pushes me forward. Besides, I’m certain a day will come when I will see a concerned party passionate about the history of Saudi Arabia extend their hands to me. Together, we can produce a national project and unequivocally rewrite our history,” he said.

Al-Ghamdi said that insightful officials at ministries and big organizations, such as the media ministry, the culture ministry, Saudi Aramco, Darah, KFNL, KAPL and many others, are expected to show their interest in adding a valuable chapter to the history of the country.

“I am hiring four apartments with a total size of 800 square meters and my highest ambitions for the time being is to have a site where I can safely keep these documents for the generations to come,” he said.

He said that he has recently received a license from the Saudi Commission for Tourism and National Heritage (SCTH), but he is hopeful of being granted a space by the SCTH or the Jeddah Municipality.

“I need a place of at least 2,500 square meters where we can display the history of Saudi Arabia on all levels,” he said.