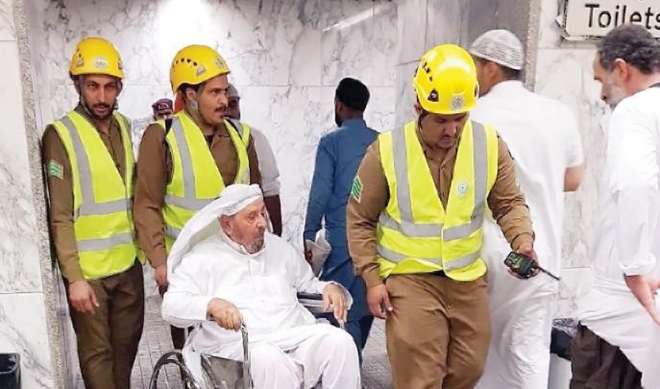 MADINAH: The Civil Defense in Madinah is implementing plans to serve visitors of the Prophet’s Mosque during the holy month of Ramadan.

Col. Mohammed Al-Baydani, director general of the Civil Defense in Madinah, said it has deployed all possible capacities and taken all necessary measures to serve visitors of the mosque and ensure their safety, in line with the general emergency plan of Interior Minister Prince Abdul Aziz bin Saud bin Naif.

Al-Baydani said the plan is being supported and followed up by Madinah Gov. Prince Faisal bin Salman and his deputy, Prince Saud bin Khalid Al-Faisal.

The plan involves 65 Civil Defense centers, and includes deploying a force that makes daily tours to handle emergencies at the mosque in coordination with relevant authorities.

The Civil Defense aims to spread safety awareness among visitors from the moment they arrive in Madinah, via brochures, flyers, telecom operators and screens at the mosque, Al-Baydani said.

More than 4,000 volunteers in Makkah are helping pilgrims and visitors to the city by distributing meals to those fasting during the holy month.

The voluntary work helps to maintain the honorable image of the holy city.

At the time of the Maghrib prayer, thousands of fasting people line up around the iftar tables at the Grand Mosque and its squares and at other mosques, waiting for the call for prayer.

As the Prophet Muhammad (peace be upon him) said: “Whoever feeds a fasting person gets the same reward, without diminishing the reward of the fasting person.”

The Sqaia and Rvada Committee in Makkah has provided permits for those wishing to contribute meals in order to ensure proper meal preparation and distribution for fasting people in the Grand Mosque and at other mosques around the city.

Makkah’s youth journey to the outskirts of the city to distribute meals and Zamzam water at roadsides and traffic intersections.

Ramadan is a month of blessings and giving. Muslims all over the world ensure that they help the destitute in whatever way possible. During this month, people on an individual basis and in groups go out of their way to help others.