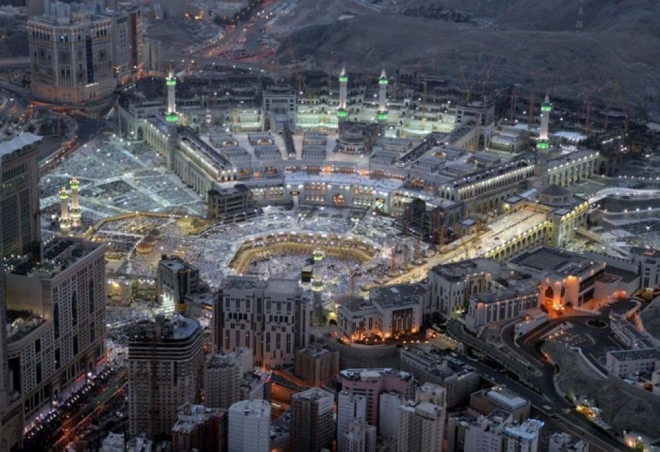 MAKKAH — Over two million worshipers thronged the Grand Mosque in Makkah and the Prophet’s Mosque in Madinah to offer Friday prayers, as well as Isha and special night prayers of Taraweeh and Qiyamullail on the 27th night of Ramadan.

There was an unprecedented flow of the faithful to the Holy Mosques on the last Friday of this year’s Ramadan that coincides with the 27th night of Ramadan, which is widely believed to be Laylatul Qadr, the Night of Power.

The Holy Qur’an was revealed to the Prophet (peace be up on him) in the Night of Power, which is better than a thousand months.

The Saudi authorities have made elaborate security arrangements for the smooth flow of worshipers and enable them to spend the blessed night in a highly spiritual and serene atmosphere.

The gathering of the faithful was in direct supervision of Custodian of the Two Holy Mosques King Salman, who spends the last days of Ramadan in the vicinity of the Holy Kaaba.

The Grand Mosque witnessed huge flow of worshippers from Friday morning as they wanted to join the last Friday prayers as well as to attend special night prayers, seeking Laylatul Qadr.

In an unparalleled spiritual ambience that the fasting month has offered, the faithful performed Umrah and engaged in supplications, seeking the infinite blessings and forgiveness from Almighty Allah.

All the floors of the Grand Mosque and its courtyards were full of worshipers, and the rows of worshipers spilled over to the streets of the Central Haram Area.

In his Friday sermon, Sheikh Abdurahman Al-Sudais, head of the Presidency for the Affairs of the Two Holy Mosques, urged the faithful to seize the golden opportunity over the remaining days of Ramadan to get much closer to God with increasing supplications and not let the holy month pass without seeking forgiveness of all their sins.

At the Prophet’s Mosque in Madinah, Sheikh Abdul Mohsen Al-Qasim, imam and khateeb, urged the believers to continue embracing the spiritual essence of good deeds that they have performed during Ramadan such as recitation of the Qur’an, giving alms, and supplications throughout the year.

He called on the faithful to use the opportunity to obtain infinite bounties from God through increasing supplications in the remaining days of the holy month.

The flow of worshippers to the Grand Mosque from various entry points of Makkah was very smooth despite the huge number of vehicles, thanks to the meticulous coordination of the traffic policemen and security forces who were deployed in the squares, roads, and neighborhoods of the holy city since early morning Friday.

The Haram Presidency, Haram Special Security Forces, the Civil Defense, and Makkah Municipality have mobilized all their resources to enable the faithful to perform their rituals in ease and comfort.