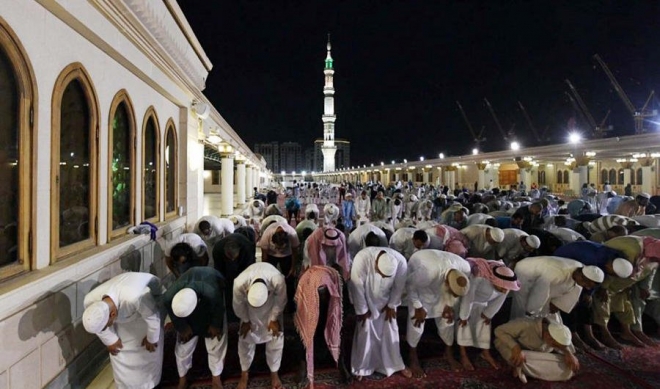 MADINAH: The Prophet’s Mosque is ready to receive nearly half-a-million worshippers for the night when the reading of the Qur’an will be finished, the Saudi Press Agency reported a government official as saying.

Reading and completing the Qur’an during the fasting month of Ramadan is considered especially holy as, in Islam, the prayer made once the Qur’an is finished is accepted by Allah.

Hundreds of thousands of Muslims are expected at the Prophet’s Mosque in Madinah for the important occasion.

The head of public relations at the General Presidency for the Affairs of the Two Holy Mosques, Jamaan Al-Asiri, said the authority had finalized all preparations for the night.

More than 5,000 employees worked to achieve the necessary cleanliness of the Prophet’s Mosque and its surroundings.

The mosque has more than 16,000 carpets, more than 300 tons of Zamzam water daily for more than 16,000 bottles and 40 reservoirs of cold water with clean, single-use cups. There are 60 drinking sites with more than 385 fountains around the mosque, he added.

• Saudi Arabia’s Supreme Court called on all Muslims throughout the Kingdom to sight the crescent of the month of Shawwal on Monday evening, Ramadan 29, corresponding to June 3.

• The Supreme Court has urged any person who sees the Shawwal crescent with the naked eye or through telescopes to report it to the nearest court and record his statement.

Mosque employees will be guiding visitors inside the courtyards of the mosque and implementing crowd control measures.

Al-Asiri said the presidency has set up external lighting, domes, umbrellas, and water-spraying fans. It has also put in place escalators and special transport measures to help the elderly and people with disabilities. There will be an increased number of gatekeepers on the ground floor and upper areas of the mosque. The presidency is working with the Red Crescent in case visitors need hospital attention, he said.