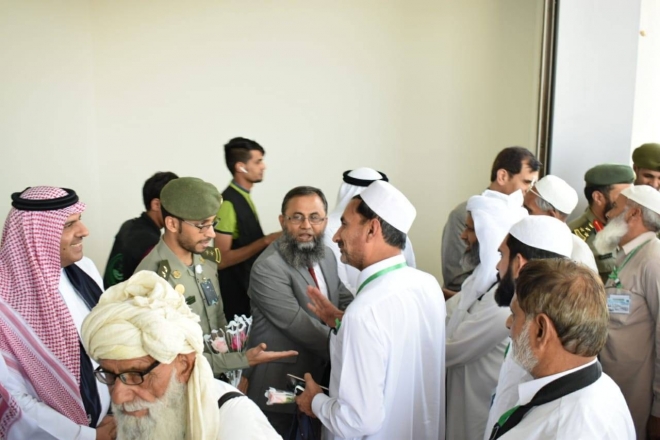 JEDDAH — Pilgrims for the upcoming Haj have started arriving in Saudi Arabia from Pakistan.

In the first Haj flight from the country, an Air Blue plane carrying 212 pilgrims, who are performing the Haj under the government scheme, reached Prince Muhammad International Airport in Madinah on Thursday.

Meanwhile, a Saudi Arabian Airlines flight arrived at the Madinah airport from Islamabad on Thursday carrying 367 pilgrims who represented the first batch pilgrims from Pakistan traveling for Haj under the Makkah Route initiative.

Yousufani and other officials welcomed the pilgrims at the airport.

The Saudi authorities have made elaborate arrangements for the pilgrims traveling under the project, which is being introduced in Pakistan for the first time this year.

Head of the Special Saudi Delegation and Director General of Passports Maj. Gen. Sulaiman Al-Yahya, Saudi Ambassador to Pakistan Nawaf Bin Saeed Al-Maliki and a number of Saudi officials were in Islamabad to oversee the arrangements.

Pakistan's Minister for Religious Affairs and Inter-faith Harmony Noor-ul-Haq Qadri and Minister of Aviation Division Ghulam Sarwar Khan were at the Islamabad airport to see off the pilgrims.

Sarwar Khan delivered the speech in which he praised the deep-rooted historical relationship between Saudi Arabia and Pakistan.

He praised the Kingdom's efforts in launching the Makkah Route initiative, which is being applied for the first time in Pakistan this year.

For his part, Qadri in his speech praised the great care being provided for Pakistani pilgrims throughout the year, whether traveling for Haj or Umrah. He expressed his thanks and gratitude to Custodian of the Two Holy Mosques King Salman and Crown Prince Muhammad Bin Salman for their great services to Islam and Muslims, including their efforts in the service of the Two Holy Mosques and the visitors of the holy houses from all over the world.

Al-Malki said the inauguration of the Makkah Route Initiative in Pakistan was a great achievement in the host of services being provided by the Kingdom to the pilgrims within the framework of the Saudi leadership's keenness to serve Islam and Muslims.

In a statement to Saudi Press Agency (SPA), Al-Maliki praised the level of services offered by Makkah Route Initiative to pilgrims in the five countries, including Pakistan, coming under the scheme this year.

He said that this initiative has contributed to facilitating pilgrims' travel to the Kingdom to perform Haj rituals with the participation of a number of government agencies in order to improve services being provided for pilgrims and to consolidate the Kingdom's pioneering roles in serving Muslims from all over the world.

A total of 21,831 Pakistani pilgrims will be traveling to Saudi Arabia aboard 72 flights under the initiative.

Saudi Arabian Airlines will ferry as many as 11,485 Pakistani pilgrims aboard 35 flights. Pakistan International Airlines (PIA), the country's flag carrier, will transport 7,390 pilgrims aboard 23 flights while 2,956 pilgrims will reach Saudi Arabia by 14 flights operated Air Blue. All these flights will depart from Islamabad.


⇐ Previous:
Streets in Makkah to have special tracks for the blind
Next: ⇒
This year’s first Indian Hajj pilgrims arrive in Madinah