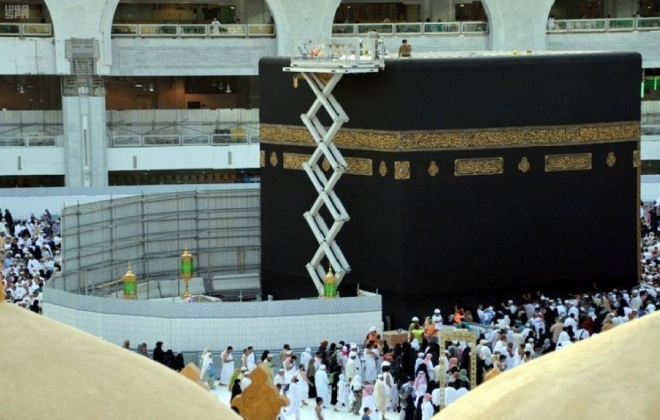 MAKKAH — The periodic maintenance of the holy Kaaba, which began on June 18, was completed on Saturday long before schedule.

Custodian of the Two Holy Mosques King Salman has ordered the maintenance of the holy house within the scope of services being extended to the pilgrims, worshippers and visitors ahead of the upcoming Haj pilgrimage.

Muslims around the world pray facing the Kaaba, a cube-shaped structure inside the Grand Mosque in Makkah. Pilgrims to the holy city walk around the Kaaba in what is known as tawaf, or circumambulation, which is a compulsory ritual in the annual Haj and the minor pilgrimage of Umrah, which is performed throughout the year.

The Ministry of Finance, represented by its office for the management of projects, supervised the maintenance work in which the Presidency of the Affairs of the Two Holy Mosques and a number of the concerned government departments participated.

The work included covering the Kaaba roof with marble, fixing the water isolation valves, treatment of the wood works on the roof and the columns, and repairing its door and threshold for draining rainwater from the roof according to the international standards using the most up-to-date technology.

Finance Minister Mohammed Al-Jadaan said the periodic maintenance of the Kaaba was within the efforts of the Saudi government to provide the pilgrims with the best of services.

He said the maintenance works took care of all minute details and was carried out by the most modern technology according to the instructions of the Custodian of the Two Holy Mosques.

Jadaan said all the government and private departments were exerting maximum efforts around the cock for the comfort of the pilgrims, residents, worshippers and visitors of the holy house in Makkah.