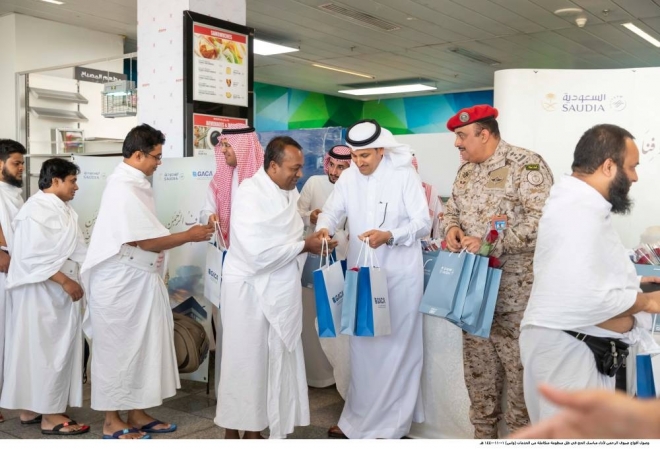 JEDDAH — Foreign pilgrims started arriving in the Kingdom on Thursday, Dhul Qada 1, which marks the beginning of the Haj Season of 2019. The first batches of pilgrims arrived from India, Pakistan, Bangladesh and Malaysia at the Haj terminal of Jeddah’s King Abdulaziz International Airport and Madinah’s Prince Muhammad International Airport from early morning onwards.

High ranking officials from the General Authority of Civil Aviation (GACA), Ministry of Haj, Jeddah and Madinah airports, and Haj missions of the respective countries accorded warm reception for the pilgrims, greeting them with flowers and gifts.

In addition to the pilgrims from Indonesia and Malaysia, pilgrims from Pakistan, Bangladesh and Tunisia are taking advantage of the ‘Makkah Route” immigration pre-clearance facility from their embarkation points for this year’s Haj for the first time.

The Proof of Concept (POC) System for pre-clearance at the point of departure to Saudi Arabia is being implemented in coordination between the Saudi authorities and their counterparts in the five countries.

The first flight carrying foreign pilgrims for this year’s Haj was also from Bangladesh. Bangladesh Ambassador to Saudi Arabia Golam Mosih, Consul General F.M. Borhan Uddin, Haj Consul Md. Masudur Rahman were among the officials who received the pilgrims in Jeddah early on Thursday morning. There were 419 pilgrims on board the Biman flight.

Receiving the pilgrims, GACA Chief Al-Mansouri spoke about the new development projects implemented at the two airports to make available the best ever facilities and services for the pilgrims. On his part, Saudia Chief Al-Jasser said the national carrier would transport 1.2 million pilgrims this year, an increase of 10 percent comparing with that of the last Haj season.

The first flight from Lahore, carrying 212 pilgrims reached Madinah. Pakistan’s Ambassador to Saudi Arabia Raja Ali Ejaz and Director General of Haj Sajid Yousufani, along with Saudi officials, welcomed the pilgrims at the airport. A Saudia flight, with 367 pilgrims on board, under the “Makkah Route” initiative, also landed in Madinah from Islamabad.

At the Islamabad International Airport, the Makkah Route initiative was inaugurated in the presence of Pakistani Minister for Religious Affairs and Inter-faith Harmony Noor-ul-Haq Qadri; Minister of Aviation Ghulam Sarwar Khan; and Head of Special Saudi Delegation and Saudi Director General of Passports Maj. Gen. Sulaiman Al-Yahya; Saudi Ambassador to Pakistan Nawaf Al-Maliki and a number of other senior officials.

Speaking on the occasion, Noor-ul-Haq Qadri praised the great care being provided for Pakistani Haj and Umrah pilgrims by the Kingdom throughout the year. He thanked the Saudi leaders for their great services to Islam and Muslims, including the service to the Two Holy Mosques and the pilgrims from all over the world.

On his part, Sarwar Khan hailed the deep-rooted historical relationship between Saudi Arabia and Pakistan. He also lauded the Kingdom’s efforts for launching the Makkah Route initiative. Ambassador Al-Malki said that the inauguration of the initiative in Pakistan this year is a great achievement in the system of services being provided by the Kingdom for pilgrims.

The first batch of pilgrims from Malaysia arrived in Madinah. There were 463 pilgrims on board the plane arrived from Kuala Lumpur airport. This was for the third consecutive year, Malaysian pilgrims arrived under the “Makkah Route” initiative.

Yusuf thanked Custodian of the Two Holy Mosques King Salman and Crown Prince Muhammad Bin Salman for implementing the initiative. The Saudi authorities have completed all preparations for the transportation of the pilgrims under the initiative.

Meanwhile, Saudi Ambassador to Indonesia Essam Al-Thaqafi inspected on Thursday preparations to launch Makkah Route initiative at Soekarno–Hatta International Airport in Jakarta. “The initiative was welcomed by officials of the Indonesian government and widely accepted by Indonesians,” the ambassador said while pointing out that Indonesian authorities have provided all necessary facilities to implement the initiative.

‘Makkah Route’, which was introduced for the first time during the Haj of 2017, is one of the initiatives of the National Transformation Program of 2020 being implemented as part of the Kingdom’s Vision 2030. A section of the Malaysian pilgrims were the first in the world using the POC system for pre-clearance at the point of departure to Saudi Arabia. All pilgrims from Malaysia and a section of pilgrims from Indonesia had their immigration pre-clearance facility from their embarkation points in the second phase last year.

Under the system, the entire travel process of the pilgrims, including their immigration checks, customs clearance, verification of whether fulfilled health requirements and encoding of baggage tags in accordance with the transport and accommodation arrangements in the Kingdom are being held at the point of departure. This will enable the pilgrims to move directly after their arrival at the Saudi airport to the buses waiting to take them to their places of residence in Makkah and Madinah.

The Haj service providers will receive the belongings of pilgrims who are beneficiaries of the initiative and deliver them at their lodgings. An integrated Saudi working team, headed by the Ministry of Interior, is supervising implementation of the procedures for the entry of the beneficiary pilgrims at the airports covered by the system and overcome all obstacles that may be encountered in their embarkation and disembarkation points.