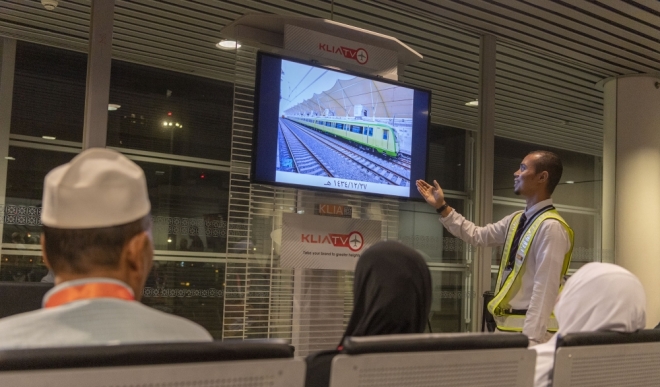 KUALA LUMPUR – Malaysian pilgrims leaving for the Kingdom for Haj were made aware of the development projects in Makkah, Madinah and the holy sites being carried out in line with the directives of Custodian of the Two Holy Mosques King Salman so as to raise the standard of services provided to pilgrims.

A number of photos taken during various Haj seasons were displayed on screens in the waiting lounge at Kuala Lumpur airport.

Muhammad Ismail, a pilgrim leaving for Haj, lauded the Kingdom’s efforts including the Makkah Road Initiative at Kuala Lumpur airport.

Amr Aiman, another pilgrim, praised the noble work being carried out by the Kingdom to serve Islam and Muslims. He said the development projects carried out at the two holy mosques and the holy sites are the best evidence of the Kingdom’s efforts to serve Haj and Umrah pilgrims.

Female pilgrim Sofia Ismail expressed happiness on competing procedures for traveling to the Kingdom as part of the Makkah Road Initiative.

She said the initiative has helped many pilgrims achieve their dream to be able to perform Haj.

The Makkah Road Initiative was launched by the Ministry of Interior with the participation of several ministries and authorities including the ministries of foreign affairs, health, Haj and Umrah, the General Authority of Civil Aviation (GACA), National Information Center and Alam Company.