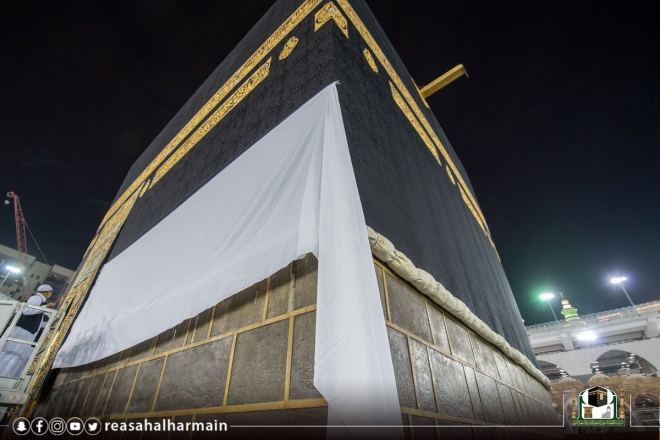 DUBAI: The lower part of Kaaba’s Kiswa, the black cloth draped around the holy shrine, was raised 3 meters in preparation for the new Hajj season and was replaced with white cloth instead, Reasah Al-Harmain said on Friday.

The procedure is done every year before the Hajj season in order to protect the Kiswa, as some pilgrims touch and pull on the black cloth when they circumambulate the Kaaba.

Up to 50 technicians and specialists oversaw the annual process, head of the General Presidency of the Two Holy Mosques Ahmad bin Muhammad Al-Mansouri said.

What some pilgrims do to the Kiswa stems from wrongful beliefs, which is why the black cloth is raised and replaced with white cloth during the Hajj, added Al-Mansouri, who is also the director general of the King Abdul Aziz Complex for the Holy Kaaba Kiswah.

The original Kiswa will be draped again after the Hajj season concludes, Al-Mansouri said.

Every year, the old black silk cloth that covers the Kaaba is removed and a new one is draped on the ninth day of the Islamic month of Dhul Hijjah.

The Kaaba cover was manufactured at the King Abdul Aziz Complex for Holy Kaaba Kiswa, which has more than 200 employees, and the largest sewing machine in the world at 16 meters long.

The Kiswa’s fabric is produced in the form of large pieces, each 10 centimeters wide and 14 meters long. Each side of the Kaaba is constructed individually according to the width of each side.

The pieces are connected while maintaining the design, and then lined with cotton cloth (the same width and length), and sewn together.

Due to the weight of the curtain of the Kaaba’s door, it is directly attached to the wall of the Kaaba.