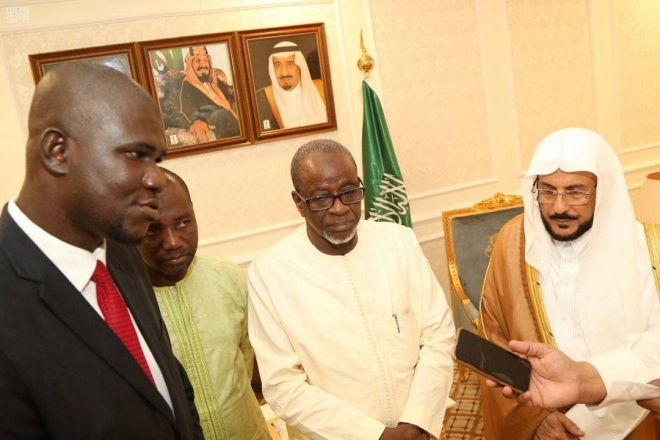 MADINAH — The Gambian Minister of Religious Affairs Haj Musa Drammeh on Sunday visited the King Fahd Complex for Printing the Holy Qur’an in Madinah, Saudi Press Agency (SPA) said. The minister praised the complex and services being provided by the Kingdom to Muslims all over the world and its moderate and wise Islamic approach under the leadership of the Custodian of the Two Holy Mosques King Salman and Crown Prince Muhammad Bin Salman.

Drammeh said the Kingdom plays a major role in serving Islam and Muslims in the world and providing care for the Two Holy Mosques and those who visit them, including pilgrims, Umrah performers and visitors.

The Gambian minister said that this is a big role and is appreciated by different Islamic leaders. It is only denied by the ungrateful people, he stressed.

Earlier in the day, the visiting Gambian official met with the Minister of Islamic Affairs, Call and Guidance Sheikh Dr. Abdullatif Bin Abdulaziz Al-Asheikh and expressed pride in Gambia’s position against Iran's expansionist ambitions to export the revolution and spread chaos in the Arab and Islamic countries, reaffirming that Gambia was among the first countries to boycott Iran due to its awareness on the threat Iran poses to security.

The Gambian minister lauded the efforts the Kingdom is exerting to serve the Guests of Allah and provide them security and comfort.

He said: “The Muslim World is thankful to the Kingdom in that it receives some three million male and female pilgrims every year. This is equal to Gambia’s population being accommodated in a small area. Despite this, it provides them security, food and comfort. This is due to success granted by Allah Almighty to this country. Nobody can deny these amenities and facilities the Kingdom is providing and the efforts it is exerting except by a contentious person who harbors hate.

Haj Musa Drammeh praised his meeting with Al-Asheikh. He said they discussed developing bilateral relations between the two countries, especially with regard to Islamic affairs and joint cooperation. He valued the Kingdom’s keenness to support Gambia in all fields, especially in the field of disseminating moderation.