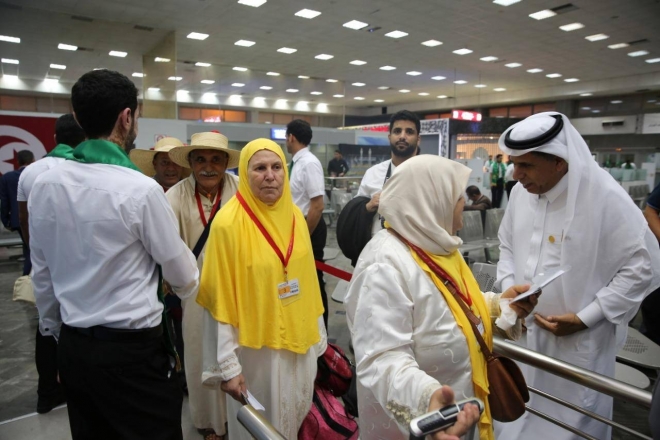 MADINAH – Pilgrims arriving in the Prophet’s City via Makkah Road Initiative from Tunisia have lauded the efforts exerted by the Kingdom enabling them perform their duties with ease and comfort.

Tunisian Consul to Saudi Arabia Sami Al-Saidi said that every year the Kingdom is providing a new service to facilitate the Haj journey from different countries. He expressed his thanks and appreciation to the government of Custodian of the Two Holy Mosques King Salman and Crown Prince Muhammad Bin Salman for all services and facilities being provided to pilgrims.

A total of 733,506 pilgrims have arrived in the Kingdom till Tuesday evening, according to statistics issued by the Saudi General Directorate of Passports (Jawazat). It said the number of pilgrims arriving by air stood at 705,360, by land 19,025, and by sea 9,121.

Meanwhile, the total number of pilgrims arriving in Madinah till Wednesday afternoon stood at 479,917.

The statistical data showed that 279,700 pilgrims left Madinah heading for the holy sites, while the total number of pilgrims remaining in the Prophet’s City until Tuesday was 200,192.

Imam and preacher of the Islamic Cultural Center in the Austrian capital Vienna Sheikh Muhammad Omar Kaleb has stressed that Saudi Arabia is exerting great efforts in caring for the Two Holy Mosques and serving pilgrims and Umrah performers.

He also praised the great services being provided by the Kingdom to expand the Two Holy Mosques, develop the holy sites, and operate the high speed train between Makkah and Madinah to increase the number of pilgrims and Umrah performers in the coming years, according to the Kingdom's Vision 2030.

A number of companies under the umbrella of the General Cars Syndicate have received a new batch of model 2020 buses, which will join the fleet of buses that will be used for transporting pilgrims.

Providing the fleet with new model buses is based on the keenness of the General Cars Syndicate and its partners to follow the latest models equipped with the latest technologies and amenities and find a modern and advanced method of transporting pilgrims, in line with the Kingdom's Vision 2030.

The General Department for Guidance Affairs, an affiliate of the General Presidency for the Affairs of the Two Holy Mosques, has launched a series of high quality programs and services to pilgrims during the Haj season, to enable them perform their duties with ease and comfort. The programs will run under the supervision of Dr. Abdulrahman Bin Abdulaziz Al-Sudais, chief of the presidency.