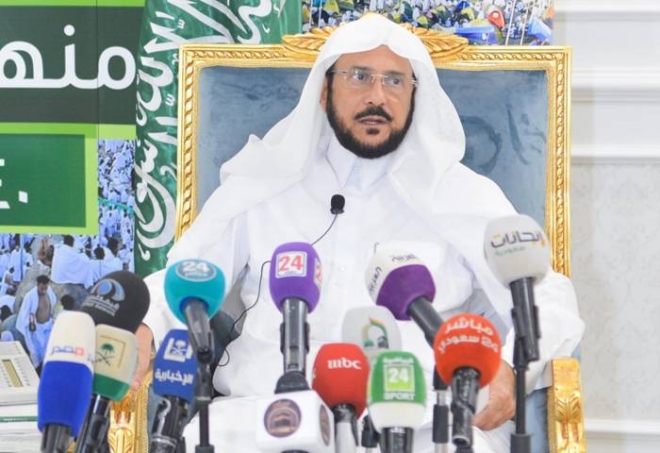 JEDDAH — While the number of pilgrims, who have arrived in the Kingdom from different countries of the world have totaled nearly one million until Sunday, the Minister of Islamic Affairs Dr. Abdullatif Al-Asheikh has stressed the necessity for all pilgrims to comply with the spirit of the Haj as ordained by the teachings of the Holy Qur’an.

In this regard, Verse 197 of Surah Al-Baqarah says: “So whoever intends to perform Haj therein (by assuming Ihram), then he should not have sexual relations (with his wife), nor commit sin, nor dispute unjustly during the Haj.” (Al-Baqarah 197)

In a press conference here on Sunday, Dr. Al-Asheikh stressed that whoever tries to create disorder and confusion among the pilgrims is undoubtedly sinful in this world and the Hereafter.

He referred to the Custodian of the Two Holy Mosques King Salman stressing devoting the Haj to worshiping Allah Almighty only, and not arousing sectarianism, hate and instilling criminality and evil.

Al-Asheikh said that the ministry has selected a big number of religious callers (Du’aat) who are well-known for their moderate approach so as to guide pilgrims in the Haj missions.

The ministry has also selected women academics, who are highly qualified in the Shariah, to work in religious call (and guidance) during the Haj.

They will create awareness among the women and families in the Grand Mosque and Makkah and spread the message of moderation and counter extremism.

The minister said that the ministry has not been informed of any violations by the khutba (imams who give sermons in the mosques).

On the contrary, he said they are responding positively to the ministry’s directions by their diligence and sincere work.